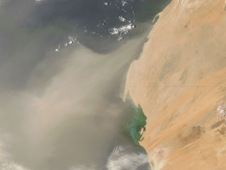 A dust plume from Northern Africa moves over the Atlantic on July 20, 2007. The westward extent of such dust could have contributed to the relatively quiet 2007 hurricane season.
Credit: NASA
> Larger image
A new analysis of environmental conditions over the Atlantic Ocean shows that hot, dry air associated with dust outbreaks from the Sahara desert was a likely contributor to the quieter-than-expected 2007 hurricane season.

Factors known to influence the number and intensity of hurricanes in a season, including El Niño, sea surface temperatures, wind, and sea level pressure, led to NOAA forecasts for an above-average 2007 hurricane season. However, the season, which runs from June through November, turned up six hurricanes – a near normal number, but less than the 10 expected and far fewer than the record-breaking 15 hurricanes in 2005.

The difference between the 2007 and 2005 seasons could be due in part to the westward reach of Saharan dry air and dust over the North Atlantic, according to researchers, including Bill Lau of NASA's Goddard Spaceflight Center in Greenbelt, Md., and co-author of a study on this finding published Aug. 14 in the American Geophysical Union's Geophysical Research Letters. The study also confirms the possible role of Saharan dust in shattering predictions for the 2006 hurricane season, and has implications for more accurate predictions for future hurricane seasons.

Lau and colleagues previously reported that the presence of dust could have contributed to a weaker 2006 hurricane season than forecasters expected. Dust over the North Atlantic blocked some sunlight from reaching the ocean, accounting for 30 to 40 percent of the drop in sea surface temperatures measured between June 2005 and June 2006. The cooler sea surface increases atmospheric stability and also reduces the transfer of heat from ocean to atmosphere – a major source of fuel that drives hurricanes. 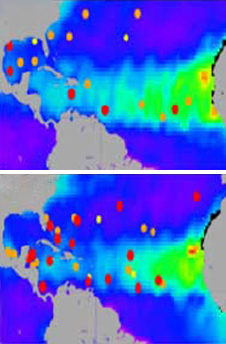 Dots mark the locations of tropical depressions, tropical storms and hurricanes during the hurricane seasons of 2007 (above) and 2005 (below). Green indicates the westward extent of dust.
Credit: NASA
Now, the team found that hurricane formation in 2007 was also hampered by Saharan dry air. They go further, however, to describe the extent to which the dry air and associated dust spread across the tropical North Atlantic, as seen by instruments aboard NASA satellites such as the Moderate Resolution Imaging Spectroradiometer. They created a "wind-stretch index," based on the east-west difference in wind speed over the tropical Atlantic. The index is connected to relative humidity over the tropical western Atlantic, and is a perfect measure of how far west dry air and dust from Africa extends over the North Atlantic.

The team found that instances of Saharan dry air and dust extending far west over the Caribbean were in sync with conditions that contributed to fewer hurricanes in both 2007 and 2006, including lower sea surface temperatures. They also found that the far-reaching western extent of dust in 2006 and 2007 was associated with less-than-normal humidity over the western North Atlantic.

"This index hasn't been looked at before," said Lau. "We introduce a way to relate wind stretch to dry air and dust, which correlate very well with humidity in the western tropical Atlantic."

The link between dust and humidity, the researchers say, could aid future forecasts. As dust outbreaks occur most often in early summer prior to peak hurricane season, researchers could use a measure of humidity in the western tropical Atlantic to gauge the extent of dust transport, possibly providing an additional parameter to estimate the following month's hurricane activity.

"The index we proposed may provide practical implications for the prediction of Atlantic hurricane activities," says Donglian Sun of George Mason University in Fairfax Va., and lead author of the study. "Further studies are needed to discern the general prediction capability of our results."

If the index is on target, the team believes it could also describe dust's role in past hurricane seasons. Records of historical wind data from ground stations could be applied to the index to infer the westward extent of dry air and dust long before satellites existed to "see" dust from above.