Art and Science in Harmony: A Song for a Space Telescope
As an accomplished musicologist and composer, Dr. Nolan Gasser has overcome many challenges, but the one from a member of NASA's Gamma-ray Large Area Space Telescope (GLAST) project was unique: write a "theme song" for the complex mission, which will investigate some of the most exotic and powerful phenomena in the universe.

Ask anyone who has tried: oil and water don't mix. So it seemed with art and science. How was he to use the emotion of music to represent the cold technical precision required for a sophisticated scientific investigation? What, if anything, do art and science have in common?

An artist's concept of the GLAST space telescope in orbit above Earth Credit: NASA
> Print-resolution copy
> View the GLAST music video
Although the challenge was intriguing to Gasser, it seemed formidable at first. "I am a musician and not at all trained in science," said Gasser.

"In early 2007, Peter broached the subject with his long-time friend Pierre R. Schwob, who also happens to be the founder and CEO of the Classical Archives website, for which I’ve been the Artistic Director since 2002," said Gasser.

"Pierre is an unusually accomplished and eclectic individual, with an equally intense passion for classical music and science. Above all, Pierre is passionate about the need to instill a love of and appreciation for cutting-edge science among the wider public, and it is thus not surprising that he immediately embraced Peter’s notion of complementing the science of GLAST with music," said Gasser.

According to Gasser, Schwob provided "generous funding" for the project, and chose him to compose the work. "To my good fortune, Pierre immediately thought of me as a candidate to create this musical complement – by virtue of his appreciation for my abilities as a composer, as well as by my long-standing association with Stanford (receiving my Ph.D. in Musicology in 2001, and serving as an Adjunct Professor of Medieval-Renaissance Musicology). Happily, Peter concurred, and the project was off and running." 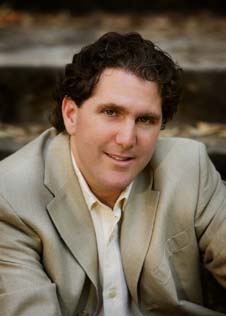 Nolan Gasser, composer of the GLAST Prelude Credit: Nolan Gasser
Once he accepted the challenge, Gasser decided he had to learn a lot more about GLAST and its science before he could proceed. "Having received a commission to compose a work for the launch and mission of the GLAST space telescope, I naturally felt obliged to learn something about it. My research included a lot of reading on the topics of GLAST, gamma rays, the electro-magnetic spectrum, particle physics, the history of astronomy and the telescope, etc.," said Gasser.

"This was then richly aided by two special elements: first is the close cooperation and support of Peter Michelson, who initially conceived the idea of celebrating the mission with music; second, was a trip -- with Peter and Pierre -- to NASA's Goddard Space Flight Center in Greenbelt, Md. At Goddard I met with Dr. Steven Ritz, the GLAST Project Scientist, as well as Dr. Neil Gehrels, the GLAST Deputy Project Scientist, and several members of the Goddard video and animation team, and learned valuable insights on the history, mission, and expectations of GLAST. Thus armed with ample knowledge and inspiration, I returned home to begin the compositional process," said Gasser.

As he learned more, Gasser decided that telling a story using music would work best. "My approach to the composition of the GLAST Prelude, distinct from many purely instrumental works, was to first conceive a detailed "narrative". I knew that I wanted to musically depict various aspects of the mission and the science involved in GLAST, and a finely programmed storyline seemed the best approach," said Gasser.

I. An opening "fanfare" celebrating, in general terms, the overall mission of GLAST.

II. The preparation for launch, as GLAST is readied upon the Delta II rocket, and countdown is begun on the launch pad at Cape Canaveral.

III. An interruption – in the midst of the countdown – as if entering a "dream sequence" in order to answer the question "How did we get here?" before launch can proceed.

IV. A GLAST Dream Sequence, including a history of astronomy, the science of the electromagnetic spectrum, the instruments, and a celebration of the international cooperation that made the mission possible.

V. A return to the launch pad, and a resumption of the countdown.

VI. Lift-off and the ascent of GLAST aboard the Delta II rocket – through the atmosphere and its push into orbit, the opening of its solar panels, and the beginning of its work as NASA’s latest and greatest space telescope.

Once the music for the GLAST Prelude was recorded (by the renowned American Brass Quintet), Gasser began working closely with Goddard TV producer Rich Melnick to realize his full vision. 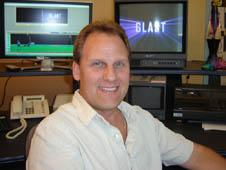 Rich Melnick, producer for the GLAST Prelude, at his editing suite. Credit: Stuart Snodgrass
> Print-resolution copy
"This piece presented quite a challenge; it stimulated my creativity and gave me the opportunity to work with the visual elements in a way that brings art and science together," said Melnick.

Chris Meaney and Walt Feimer of Goddard’s Conceptual Image Lab animation group created the majority of the animation used in the program.

"I constantly "saw" images and scenes as I was writing my notes and rhythms. While my descriptions of the visuals I imagined were quite specific, I actually had very little in the way of particular footage in mind – which I naturally left up to the experts. Having no skills or background in videography, I had no idea how exactly the two mediums would come together, but I had faith that the Goddard team would figure it out – which has been demonstrated in spades!" said Gasser.

So, as unlikely as it seemed in the beginning, science inspired art. Gasser and his team demonstrated that they had successfully overcome the challenge of blending art and science when the GLAST Prelude was presented June 6, 2008 to an audience of NASA and GLAST contractors at a reception in Cocoa Beach, Fla., prior to launch. The debut, co-sponsored by General Dynamics and Stanford University, received rave reviews.

"If I may, I am happy to say that following the "premiere" of the music-video, I had several people come up to me and say that after experiencing the music-video their understanding or appreciation of the GLAST mission was enhanced – as if some bell went off that hadn’t previously. Since then, several non-scientists have said that their initial challenges in understanding GLAST were markedly ameliorated after watching the music-video. Finally, others have noted that the music has somehow "captured" the mission in ways that words could not, or provides a welcome emotional soundtrack to the launch and mission. All of these are delightful to hear, and as much as I can ask for," said Gasser.

From Gasser's experience, it seems art can inspire science as well, perhaps because they do have something in common after all – scientists and artists both share the wonder of experiencing something new. "Rarely if ever have I been so consumed emotionally and spiritually with a non-musical topic as I prepare to compose – whereby the topic itself forms such a passionate source of inspiration," said Gasser.

"In many ways, the GLAST musical project has awakened in me a previously unknown love of science that nowadays borders on obsession. I am constantly reading books, magazines, and web postings on physics, cosmology, and astronomy, and am enthralled at how the pieces are slowly coming together in my mind. It’s nice to know that at age 43 one can find a whole new "world" to inspire and engage," said Gasser.

The great physicist Albert Einstein acknowledged this connection when he wrote, "The most beautiful experience we can have is the mysterious. It is the fundamental emotion which stands at the cradle of true art and true science. Whoever does not know it and can no longer wonder, no longer marvel, is as good as dead, and his eyes are dimmed."

The struggle to create the GLAST Prelude revealed another link between art and science. According to Gasser, both scientists and artists share the experience of a flash of inspiration, followed by the grinding struggle to realize their vision by working out the details.

"I am not a scientist, but it seems obvious to me that both scientific and musical projects operate from a mutually dependent combination of inspired ideas – often fanciful, abstract, or aesthetic – and the gritty techniques that make them translatable to others. I’ve often read how Einstein and other scientific innovators came to their ideas not first by crunching numbers, but rather by simply thinking about the world or the Universe and how it "should" be – and only then turned to the labor of mathematics or laboratory experiments to prove these ideas to themselves and others. So it is – in my experience – with musical composition: the idea of a section comes as a "flash" of sound (how it "should" be) and only then can I roll up my sleeves and figure out what notes, harmonies, and rhythms can realize that idea and make it audible to myself and others," said Gasser.

The collaboration between scientist and composer will continue – Schwob commissioned a second and larger composition to be written in celebration of GLAST, Cosmic Reflection, to be started later this year, for narrator and orchestra (on a libretto co-written by Schwob and famed physicist / author Lawrence Krauss). It will premiere live at the Kennedy Center for the Performing Arts in Washington D.C., in conjunction with the 1st GLAST Symposium to be held in that city in fall 2009.

"Cosmic Reflection will be somewhat of an updated iteration of Gustav Holst’s The Planets, but now taking on the full cosmic history from the Big Bang to the present and beyond – with an acknowledgement of the marvel that is the human ability to reflect upon the very Universe that gave rise to us," said Gasser.

"Above all, both science and art aim to reflect and better understand the Universe around us, and to share these insights with others. If the GLAST Prelude, or any musical or artistic rendering of any science mission, can help spark new interest or passion in the science itself among the broader public, then it will have done its job well. At the least, it's an honor to be able to make an effort in this regard." adds Gasser.

To view the GLAST music video, refer to: http://www.nasa.gov/multimedia/podcasting/GLAST_musicvid_080610.html

For a complete transcription of Gasser’s responses to the author’s questions, see: http://www.nolangasser.com/GLASTPrelude.html