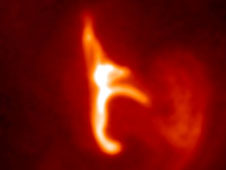 An image of the solar flare taken using the X-Ray Telescope onboard Hinode on June 7, 2007. This shows the flare loops in the solar atmopshere at temperatures exceeding 10 million degree Celsius. Courtesy of JAXA.
> Higher resolution image
A NASA-funded researcher has discovered that solar flares -- explosions in the atmosphere of the sun -- get much hotter when they stay "focused".

"A flare typically divides its energy between directly heating the solar atmosphere and accelerating particles," said Dr. Ryan Milligan of the Oak Ridge Association of Universities, Tennessee, who is stationed at NASA's Goddard Space Flight Center in Greenbelt, Md. "This flare seemed to focus on one task, devoting all its energy to heating, allowing it to become millions of degrees hotter than its multi-tasking cousins." The result will be presented Wednesday, April 2 at the Royal Astronomical Society's National Astronomy Meeting 2008 at Queen's University, Belfast, United Kingdom.

Solar flares are caused by the sudden release of magnetic energy. The largest can release as much energy as a billion one-megaton nuclear bombs. However, the flare observed in this study was a less powerful "micro" flare. NASA researchers want to understand flares because they generate radiation that can be hazardous to unprotected astronauts, like those walking on the surface of the moon.

Flares normally occur above loops of electrically conducting gas, called plasma, in the sun's atmosphere. When a typical flare goes off, it heats the plasma and sends beams of electrons racing down the sides of the loops. The electron beams evaporate more plasma from the sun's visible surface, which expands back up the loops.

"This evaporated plasma has traditionally been believed to be the source of the hottest temperatures seen in solar flares," said Milligan. "However, the flare in this new observation reached a temperature of almost 27 million degrees Fahrenheit -- some nine million degrees hotter than expected for a flare of this size -- without any evidence for beams of accelerated electrons."

Milligan used the Reuven Ramaty High Energy Solar Spectroscopic Imager (RHESSI) and Hinode spacecraft to make his observation of the microflare on June 7, 2007. RHESSI revealed that the flare had a peak temperature of 27 million degrees, and also that the flare showed no evidence for high-energy electrons. Hinode was able to show the effects of the energy released at various layers in the solar atmosphere. In particular, the Extreme-ultraviolet Imaging Spectrometer instrument was used to detect signatures of plasma evaporation from the sun's surface through Doppler shifts of emission lines. The low-velocities observed confirmed the RHESSI observation that high-energy electrons were not present.

"If our assumption is correct, then this result tells us that the energy released during a solar flare is more efficient at achieving a higher temperature if the energy is used to directly heat the plasma in the sun's atmosphere, instead of being divided between heating and particle acceleration. This very effect has recently been shown in computer simulations of energy release during microflares," said Milligan.

The research was funded by the NASA Postdoctoral Program administered by the Oak Ridge Association of Universities, Tennessee.

Hinode is a Japanese mission, collaborating with NASA and the Science and Technology Facilities Council, United Kingdom, as international partners. The RHESSI project is a NASA Small Explorer mission managed by the Space Sciences Laboratory of the University of California, Berkeley. The Explorers Program Office at Goddard provides management and technical oversight under the direction of the Heliophysics Division of the Science Mission Directorate at NASA Headquarters in Washington, D.C.