2007 Was Tied as Earth's Second-Warmest Year
Climatologists at the NASA Goddard Institute for Space Studies (GISS) in New York City have found that 2007 tied with 1998 for Earth’s second warmest year in a century. 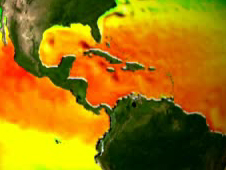 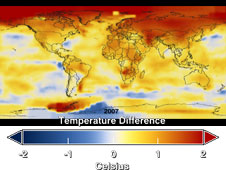 Image right: This still from the animation presented shows the temperature anomalies that were present during 2007. Click image for enlargement. Click here for visualization Credit: NASA

The greatest warming in 2007 occurred in the Arctic, and neighboring high latitude regions. Global warming has a larger affect in polar areas, as the loss of snow and ice leads to more open water, which absorbs more sunlight and warmth. Snow and ice reflect sunlight; when they disappear, so too does their ability to deflect warming rays. The large Arctic warm anomaly of 2007 is consistent with observations of record low geographic extent of Arctic sea ice in September 2007. 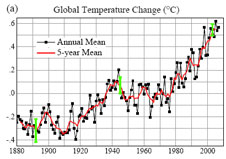 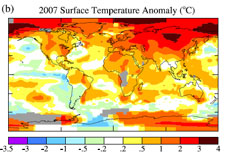 Image right: This shows temperature anomalies for the 2007 calendar year relative to the 1951-1980 mean. Warmer areas in red, cooler areas in blue. Largest increases were in the northern hemisphere. Click image for enlargement. Credit: GISS