What superficially resembles a giant moth floating in space is giving astronomers new insight into the formation and evolution of planetary systems. 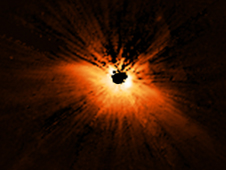 This is not your typical flying insect. It has a wingspan of about 22 billion miles. The wing- like structure is actually a dust disk encircling the nearby, young star HD 61005, dubbed "The Moth." Its shape is produced by starlight scattering off dust.

Dust disks around roughly 100-million-year-old stars like HD 61005 are typically flat, pancake-shaped structures where planets can form. But images taken with NASA's Hubble Space Telescope of "The Moth" are showing that some disks sport surprising shapes.

"It is completely unexpected to find a dust disk with this unusual shape," said senior research scientist Dean Hines of the Space Science Institute in Boulder, Colo., and a member of the Hubble team that discovered the disk. "We think HD 61005 is plowing through a local patch of higher-density gas in the interstellar medium, causing material within HD 61005's disk to be swept behind the star. What effect this might have on the disk, and any planets forming within it, is unknown."

Hines called this possible collision "unusual, because we don't expect very much material to be in the solar neighborhood. That's because the area through which our Sun is moving was evacuated within the past few million years by at least one supernova, the explosion of a massive star. Yet, here's evidence of dense material that's very close, only 100 light-years away."

Astronomers have found evidence that the environment in which a star forms influences its prospects for planet formation. Hubble has actually seen that young planet-forming disks can be affected directly by their environment. The harsh stellar radiation from the Trapezium stars in the Orion Nebula has altered some disks. It is unclear, however, what effect passage through a cloud similar to the one in which HD 61005 finds itself would have on planet formation. Researchers have speculated that passage through dense regions of the interstellar medium could impact the atmospheres of evolving planets.

The Moth is part of a survey of Sun-like stars that Hines and collaborators observed with Hubble's Near-Infrared Camera and Multi-Object Spectrometer (NICMOS) and NASA's Spitzer Space Telescope to study the formation and evolution of planetary systems. Under the lead of Michael Meyer of the University of Arizona in Tucson, the team initially used Spitzer to look for heat radiation - the tell-tale sign of dust warmed by the star - to identify interesting star systems.

Hines then teamed with Glenn Schneider of the University of Arizona to use Hubble's high- contrast imaging capability of the NICMOS coronagraph to image these disks and reveal where the dust detected by Spitzer resides. The NICMOS coronagraph blocked out the starlight so that astronomers could see details in the surrounding disk.

Added Meyer: "Combining observations from these two spacecraft gives us information about the composition of the dust grains, whether they're icy or sandy, or whether they're like the sooty smoke particles rising from a chimney. The composition and sizes of the dust can tell us a lot about the dynamics and evolution of a solar system. In our solar system, for example, astronomers have evidence of rocks smashing into each other and generating dust, as in the asteroid and Kuiper belts. We're seeing these same processes unfold in other planetary systems."

Hines and his collaborators will report their finding on Jan. 10 at the 211th meeting of the American Astronomical Society in Austin, Texas. The result also appeared in the December 20 issue of the Astrophysical Journal Letters.

The Space Telescope Science Institute conducts Hubble science operations. The institute is operated for NASA by the Association of Universities for Research in Astronomy, Inc., Washington.

> NASA's Hubble site
> More images and information from Hubblesite.org
› Back To Top