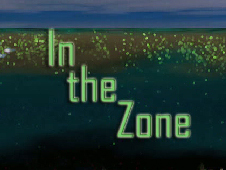 > View a "dead zones" Web video
Credit: NASA's Goddard Space Flight Center
It's summertime and people are flocking to the coasts around the country. But when summer storms arrive, it's not only beach-goers who are affected; the rains can also have an impact on living creatures far below the ocean surface. Summer storms sweep fertilizers into the rivers and streams and carry them to the shoreline. Once the plumes of storm and river runoff reach the coast, the nutrients in fertilizers can feed tiny ocean plants, called phytoplankton, which can bloom and create "dead zones," or oxygen-deficient areas. Phytoplankton growth utilizes the dissolved oxygen in the water.

Ocean dead zones are regions where water becomes stripped of its dissolved oxygen. These “hypoxic” (low oxygen) and "anoxic" (no oxygen) conditions can prove lethal for many marine species, changing the biology and chemistry of the ocean. In a few places throughout the world, dead zones occur throughout the year, but summer storms can intensify agricultural runoff, resulting in big phytoplankton blooms that trigger the phenomena. 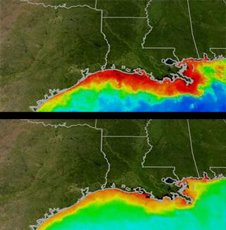 These images show how ocean color changes from summer (top) to winter (bottom) in the Gulf of Mexico. They were created from the Moderate Resolution Imaging Spectroradiometer (MODIS) instrument that flies about NASA's Aqua satellite. Reds and oranges represent high concentrations of phytoplankton and river sediment.Credit: Goddard SVS
> Summer: larger image
> Winter: larger image Phytoplankton are critical to life and are particularly important marine organisms. These microscopic aquatic plants are dispersed throughout the world’s oceans. The plants’ distribution is driven by available light, the presence of nutrients, and physical processes like ocean circulation and upwelling.

"It’s safe to say, with a few exceptions, that all life in the ocean ultimately depends on phytoplankton for its nutrition," notes NASA oceanographer Gene Feldman, Goddard Space Flight Center, Greenbelt, Md.

Under certain conditions, excessive phytoplankton growth can result in a dead zone. Dead zones form when large quantities of organic matter, present from the excessive blooms of phytoplankton at the surface, sink to the bottom. After the organic matter or dead phytoplankton sink, bacteria break the dead or decaying phytoplankton down in a process known as aerobic decomposition, releasing carbon dioxide but absorbing oxygen as they work. The resulting low oxygen conditions can cover expansive areas, killing the oxygen-dependent aquatic species, such as fish, that cannot escape their reach, or driving them out of their habitat.

Summer storms intensify the runoff of fertilizers from lawns and farmland, which seep into the rivers and streams that comprise a local watershed and provide a jolt of nutrients to phytoplankton that live along the shore. Excessive nutrients from human activity are one reason many dead zones occur at the mouth of large rivers and in the bays along the shore. 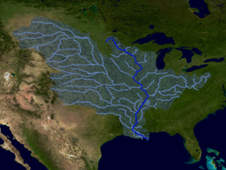 This image illustrates the flow of water from tributaries in the middle of the United States, down the Mississippi River, and into the Gulf of Mexico. Human activity far from the ocean can have a dramatic impact on life in the sea, as many of the nutrients, fertilizers, and pollutants that impact the health of the Mississippi River and Gulf of Mexico originate far inland. Credit: Goddard Conceptual Image Lab
> Larger image For a decade, scientists have used satellite measurements of ocean color to quantify the global amount of phytoplankton and to link its variability to environmental factors. The Sea-viewing Wide Field-of-view Sensor (SeaWiFS) allows researchers to measure how blue or how green the ocean is, and from those measurements they determine the amount of phytoplankton in the global oceans. SeaWiFS, a partnership between NASA and industry, is in its tenth year in orbit and measures ocean color, which can be directly related to levels of phytoplankton throughout the world’s oceans.

Satellites do not actually "see" dead zones, as satellites cannot monitor what happens at the bottom of the ocean. Satellites can monitor the distribution and abundance of phytoplankton and other materials in the global oceans at the ocean’s surface, including conditions that may lead to phenomena like dead zones. As summer heats up, this "eye in the sky" may soon detect big phytoplankton blooms edging the shore, which spells trouble for aquatic life below.

For more information and images from MODIS, please visit:
http://modis.gsfc.nasa.gov/