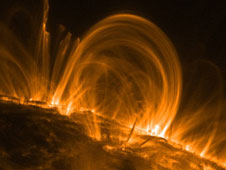 “It has become clear in recent years that coronal heating is a highly dynamic process, but inconsistencies between observations and theoretical models have been a major source of heartburn. We have now discovered two possible solutions to this dilemma: energy is released impulsively with the right mix of particle acceleration and direct heating, or energy is released gradually very close to the solar surface,” says James Klimchuk, an astrophysicist at the Goddard Space Flight Center’s Solar Physics Laboratory in Greenbelt, Md. Klimchuk will present his team’s findings on May 29 at the American Geophysical Union conference in Ft. Lauderdale, Fl.

X-rays and ultraviolet radiation from the solar corona affect Earth and its atmosphere. For satellites, this can be a real drag—literally. As Earth’s atmosphere gets hotter, it expands and becomes denser at high altitudes. When this happens, satellites experience more drag, which changes their orbits. Accurately predicting this “space weather” gives satellite operators more time to respond to or avert problems that could potentially cause interruptions and outages.

In order for scientists to build realistic models of the corona, they “must understand coronal heating. It’s the root cause of all this radiation,” says Klimchuk.

A comparison of numerical simulations with imaging and spectral data from NASA missions reveals that the coronal heating mechanism is highly impulsive, or concentrated close to the solar surface, or both.

The corona is made up of loops of hot gas that arch high above the sun’s surface. These loops can have a wide range of temperatures, many reaching several million degrees Kelvin, but those of intermediate temperature have proven the most difficult to explain. Impulsive energy bursts called nanoflares seem to be the key. “Nanoflares can release their energy in different ways, including the acceleration of particles, and we now understand that the right mix of particle acceleration and direct heating is one way to explain the observations,” says Klimchuk.

Another possibility is that energy release happens very gradually, but very close to the sun’s surface. In this case, a phenomenon called thermal nonequilibrium causes the loops to go through periodic fits of dynamic behavior. The latest computer simulations suggest that these solar temper tantrums may also be able to explain the observations.

Either way, accurate space weather forecasts rely on a good physical understanding of how the corona works. How the corona radiates depends entirely on its thermal structure, and its thermal structure depends entirely on its heating. Detailed studies of nanoflare heating and thermal nonequilibrium are taking scientists one step closer to understanding the Sun-Earth connection. Laura Layton
NASA's Goddard Space Flight Center
› Back To Top