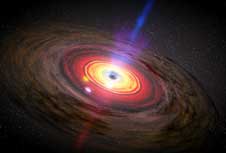 It’s well known that black holes can slow time to a crawl and tidally stretch large objects into spaghetti-like strands. But according to new theoretical research from two NASA astrophysicists, the wrenching gravity just outside the outer boundary of a black hole can produce yet another bizarre effect: light echoes.

"The light echoes come about because of the severe warping of spacetime predicted by Einstein," says Keigo Fukumura of NASA’s Goddard Space Flight Center in Greenbelt, Md. "If the black hole is spinning fast, it can literally drag the surrounding space, and this can produce some wild special effects."

Fukumura and his NASA Goddard colleague Demosthenes Kazanas are presenting their research this Wednesday in a poster session at the American Astronomical Society’s 2008 winter meeting in Austin, Texas. They will also discuss their results in a press conference scheduled for 2:00 P.M. CST on Thursday. 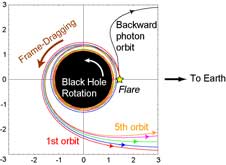 Image left: About 75% of a flare’s X-rays (black line) head toward Earth without completing an orbit. But the remainder orbit the black hole one or more times (red, blue, green, pink, and orange lines) before heading our way. Credit: Keigo Fukumura

Many black holes are surrounded by disks of searing hot gas that whirl around at nearly the speed of light. Hot spots within these disks sometimes emit random bursts of X-rays, which have been detected by orbiting X-ray observatories. But according to Fukumura and Kazanas, things get more interesting when they take into account Einstein’s general theory of relativity, which describes how extremely massive objects like black holes can actually warp and drag the surrounding space-time.

Many of these X-ray photons travel to Earth by taking different paths around the black hole. Because the black hole’s extreme gravity warps the surrounding spacetime, it bends the trajectories of the photons so they arrive here with a delay that depends on the relative positions of the X-ray flare, the black hole, and Earth. 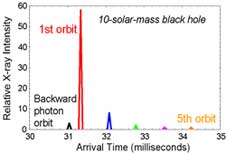 Image right: An observer will see multiple X-ray signals from the same flare, with the timing evenly spaced for the X-rays that completed one or more orbits around the black hole. These repeating signals are light echoes. Credit: Keigo Fukumura

But if the black hole rotates very fast, then according to Fukumura and Kazanas’ calculations, the delay between the photons is constant, independent of the source’s position. They discovered that for rapidly spinning black holes, about 75 percent of the X-ray photons arrive at the observer after completing a fraction of one orbit around the black hole, while the remaining photons travel the exact same fraction plus one or more full orbits.

"For each X-ray burst from a hot spot, the observer will receive two or more flashes separated by a constant interval, so even a signal made up from a totally random collection of bursts from hot spots at different positions will contain an echo of itself," says Kazanas.

Image left: An X-ray observatory will receive large numbers of signals from multiple flares, and the signals will appear at first glance to be totally random. Credit: Keigo Fukumura

Though difficult to discern in the raw data, astronomers can use a Fourier analysis, or other statistical methods, to pick up these hidden echoes. Among other things, a Fourier analysis is a mathematical tool for extracting periodic behavior in a signal that might otherwise seem totally random. The echoes would appear as quasi-periodic oscillations (QPOs). An example of a QPO with a period of 10 seconds might exhibit peaks at 9, 21, 30, 39, 51, and 61 seconds.

If one considers a 10-solar-mass black hole that formed from a dying star, and if the black hole is spinning more than 95 percent of its maximum possible speed, the period of its QPOs would be about 0.7 milliseconds, corresponding to about 1,400 peaks per second, which is three times higher than any QPOs that have been detected around black holes. NASA’s Rossi X-ray Timing Explorer satellite could measure such high-frequency QPOs, but the signal would have to be very strong. 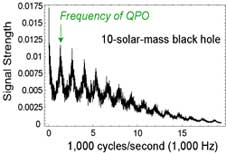 Image right: After performing a mathematical computation known as a Fourier analysis, scientists can extract a quasi-periodic signal (light echoes) from what appears to be random noise. Credit: Keigo Fukumura