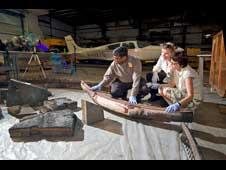 > Larger image
Scientists examine the 1966 Apollo test vehicle heat shield. Credit: Smithsonian Museum/Eric Long
NASA scientists developing the next generation of exploration vehicles and heat shields for NASA's Orion Crew Exploration Vehicle experienced "Christmas in July" when they uncrated the heat shields used on the Apollo missions some 35 years ago. These shields now are being analyzed to help with the development and engineering process. 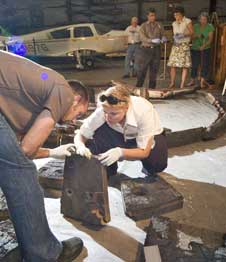 > Larger image
Matt Gasch of NASA Ames and Betsy Pugel of NASA Goddard examine the remains of a 1966 Apollo test vehicle heat shield. Credit: Smithsonian Museum/Eric Long "We started working together at the end of June to track down any Apollo-era heat shields that they had in storage," said Elizabeth (Betsy) Pugel of the Detector Systems Branch at NASA Goddard. "We located one and opened it. It was like a nerd Christmas for us!"

The Orion team was interested in the archived heat shield material because it included an Apollo heat shield that flew into Low Earth Orbit and returned to Earth on August 26, 1966.

"We are examining the design of the carrier structure (the metal structure that connects the heat shield to the vessel that contains the astronauts) and the heat shield material’s thermal response," Pugel said.

"The Smithsonian has been generous in their providing large pieces of the heat shield that we will be doing destructive and non-destructive testing on during the months before Orion’s Preliminary Design Review," said Matthew Gasch, a research scientist at NASA Ames. "This information will further our confidence in our design and materials development."

Orion will be capable of carrying crew and cargo to the space station. It will be able to rendezvous with a lunar landing module and an Earth departure stage in low-Earth orbit to carry crews to the moon and, one day, to Mars-bound vehicles assembled in low-Earth orbit.

Orion will be the Earth entry vehicle for lunar and Mars returns. Orion’s design will borrow its shape from the capsules of the past, but takes advantage of 21st century technology in computers, electronics, life support, propulsion and heat protection systems.

Making its first flights early in the next decade, Orion is part of the Constellation Program to send human explorers back to the moon, and then onward to Mars and other destinations in the solar system.