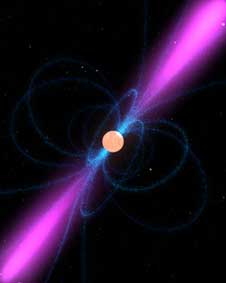 One thing GLAST will study is gamma rays from pulsars as seen in this animation. Credit: NASA
> Click to view video
Several bases of operations for NASA's Gamma-ray Large Area Space Telescope (GLAST) are gearing up for data from the recently launched satellite.

NASA Goddard is responsible for several aspects of GLAST's mission as it begins transmitting data for the world to see. The GLAST Mission Operations Center (MOC) and the GLAST Science Support Center (GSSC) were provided by and are located at NASA Goddard. The second operation is the Large Area Telescope (LAT) Instrument Science Operations Center (ISOC) at the Stanford Linear Accelerator Center (SLAC), in Menlo Park, Calif. The ISOC is responsible for maximizing the LAT's science performance in the areas of Flight Operations, Science Operations and the development of Science Analysis Systems.

ISOC manager Rob Cameron from SLAC said, “Powering up the LAT has been even smoother than we had hoped. Everything has worked well—in fact, it’s going great. We’re already receiving high-quality data that we can use to get the instrument ready for the best science return.”

The observatory is commanded from the Mission Operations Center (MOC) at NASA Goddard Space Flight Center, and during the present initial on-orbit commissioning phase is staffed by a team from across the mission, including from SLAC.

The third operations area is at NASA's Marshall Space Flight Center. Marshall hosts the GLAST Burst Monitor (GBM) Instrument Operations Center. Located at the National Space Science and Technology Center (NSSTC) in Huntsville, Ala., operations personnel and scientists working in the GBM Instrument Operations Center will scrutinize the health of the monitor and enjoy a first-hand peek at ground-breaking new gamma ray science. The NSSTC is a partnership between NASA, the state of Alabama and several universities. 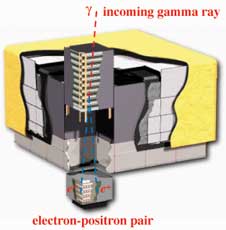 Cutaway of the LAT instrument showing an inside view of one of the towers as an incoming gamma ray interacts producing an electron-positron pair. Credit: LAT Collaboration The GLAST Science Support Center (GSSC) will serve as the primary interface between the GLAST mission and the scientific community. The GSSC will support the planning and scheduling of science observations, as well as establishing and maintaining a publicly accessible archive of all GLAST data products. Data analysis software and documentation will also be maintained and disseminated by the GSSC. In addition, the GSSC administers the guest investigator program for NASA HQ providing proposal preparation tools, documentation as well as technical and scientific support.

"As manager of the GLAST Science Support Center (GSSC), my most important responsibility is to facilitate broad community involvement in the science,” said Chris Schrader of NASA Goddard. "The GSSC will provide access to the GLAST data, the software to analyze those data, and assist scientists from the U.S. and abroad who wish to become involved in this exciting new endeavor."