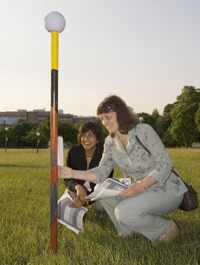 A night of science and wonder awaited those attending the unveiling of the new extra-solar planet exhibition at Goddard’s Visitor Center on the evening of June 5, 2007.

The new artistic installation, Worlds Beyond, is a hands-on, interactive exhibit that will be used to educate and stimulate student interest in planetary science and the search for planets outside of our solar system.

Image right: Goddard's Anita Krishnamurthi and Jennifer Wiseman get up close and personal with one of the student projects representing a specific extra-solar planet. Click image for higher resolution. Credit: NASA/Pat Izzo

The exhibition showcases the first effort of a larger, ongoing educational program, in which groups of local middle school students adopt extrasolar planets and, after learning all they can about the planet, turn that knowledge into a visual representation of their “alien” world. 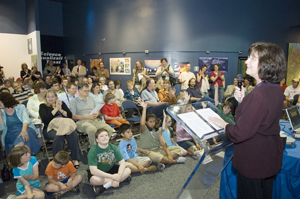 Worlds Beyond was organized by the National Space Society in partnership with the James Webb Space Telescope’s education effort at Goddard, led by Anita Krishnamurthi, and Goddard Visitor Center Director, Carmel Conaty. The program was sponsored by Northrop Grumman.

George Whitesides, Executive Director of the National Space Society, remarked that, "Worlds Beyond will give students and the public a remarkable personal connection to our celestial neighborhood, and to these special extra-solar systems." 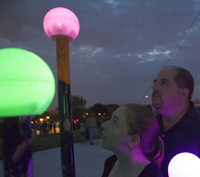 Image right: As the sun set, the students' extra-solar planets began to illuminate the grounds of the visitor center, bringing the Worlds Beyond instillation alive. Click image for higher resolution. Credit: NASA/Pat Izzo

The theme of extrasolar discovery continued throughout the evening as noted musician Marty Quinn preformed a composition inspired by scientific data from newly-discovered extrasolar planets and with the unveiling of a new model of the Webb Telescope.

The event culminated with an LED light display representing the Earth’s local Galactic region that truly brought the Worlds Beyond exhibit to life.