Moseley, a senior astrophysicist at NASA’s Goddard Space Flight Center in Greenbelt, Md., will receive the award at the AAS meeting in Honolulu in May. 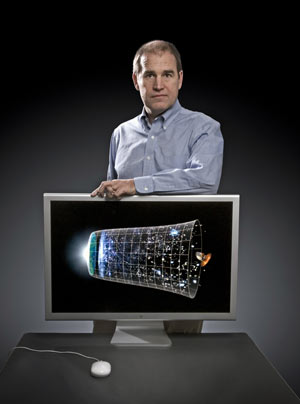 Moseley received the award for his extraordinary contributions for over two decades to the development of astronomical detectors covering a huge wavelength range from X-rays to the sub-millimeter. These detectors have been used in some of NASA’s most successful space missions, from the Cosmic Background Explorer (COBE) to the space infrared observatory Spitzer, that have profoundly changed our understanding of the universe.

Moseley continues to focus his creative energies on future missions, most prominently on the development the microshutter array, a micromechanical device which will allow the James Webb Space Telescope to make its most critical observations one hundred times faster. The Web telescope is regarded as the successor to the Hubble Space Telescope, and is targeted for launch in 2013. The Web's new microshutters promise to enable detailed study of the first galaxies to form in the universe after the Big Bang.

The award, named for the University of Maryland physicist who built the first detectors for gravitational waves, recognizes an individual scientist for the design, invention or significant improvement of instrumentation leading to advances in astronomy. The Weber Award has been presented annually since 2002; previous recipients include James E. Gunn and Frank J. Low.

Moseley worked extensively on COBE as a member of its Science Working Group. The satellite made groundbreaking measurements of the Cosmic Microwave Background Radiation, which show the universe soon after the Big Bang. John Mather, Ph.D. and George Smoot, Ph.D. won the 2006 Nobel Prize in Physics for this work.

Moseley’s accomplishments also include invention of the X-ray microcalorimeter, a sensitive detector used in X-ray astronomy. He has also worked on the following programs that have either flown or are expected to fly: the Kuiper Airborne Observatory, the Stratospheric Observatory for Infrared Astronomy (SOFIA), NASA’s Spitzer Space Telescope and Japan’s Suzaku (ASTRO-E2) mission.

Moseley grew up in Ebony, Va. He received his bachelor’s degree from Connecticut College, his master’s degree and Ph.D from University of Chicago. He is a member of the American Physical Society and the American Astronomical Society.