GREENBELT, Md. - Scientists and engineers have created and successfully tested a set of algorithms and software programs which are designed to enable the 19 individual mirrors comprising NASA's powerful James Webb Space Telescope to function as one very sensitive telescope. 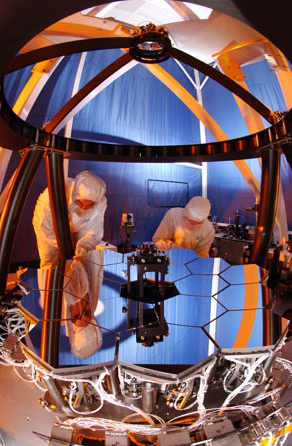 Image right: Engineers at Ball Aerospace test the Wavefront Sensing and Control testbed to ensure that the 18 primary mirror segments and one secondary mirror on JWST work as one. The test is performed on a 1/6 scale model of the JWST mirrors. Click image for Quicktime video. Credit: NASA/Northrop Grumman/Ball Aerospace

NASA researchers will present findings on these algorithms and software programs, called the "Wavefront Sensing and Controls" at the Optics and Photonics meeting of the Society for Photo-Optical Instrumentation Engineers (SPIE) meeting. The SPIE meeting will be held at the San Diego Convention Center, 111 West Harbor Drive, San Diego, Calif., August 26-30. The session, called "TRL-6 for JWST Wavefront Sensing and Control" will be on Sunday, August 26 from 11:30 a.m. - 11:50 a.m. PDT, in room 29B, and is Paper 6687-7 of Conference 6687.

After its launch in 2013, when the Webb Telescope settles into its vantage point about one million miles from Earth, and periodically thereafter, the orientations of the telescope’s 18 primary mirror segments and the position of the secondary mirror will have to be adjusted to bring light from the universe into focus. Through a process called "Wavefront Sensing and Control," or WFSC, software aboard the observatory will compute the optimum position of each of the 19 mirrors, and then adjust the positions, if necessary.

The Webb Telescope's 18 primary mirror segments cover a combined total area of 25 square meters (approx. 30 square yards) and a diameter of 6.5 meters (approx. 21 feet). "It's critical that all 18 mirror segments be aligned in position so that they act as one smooth surface, and the secondary mirror be placed exactly right," said Bill Hayden, Systems Engineer at NASA Goddard Space Flight Center, Greenbelt, Md. "This will allow scientists to clearly focus on very dim objects that we can't see now." 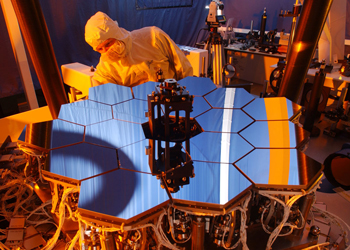 Image left: Through a process called "Wavefront Sensing and Control," or WFSC, software aboard the observatory will compute the optimum position of each of the 18 primary mirrors and the one secondary mirror, and then adjust the positions, if necessary. Shown is a 1/6 model of the JWST mirrors that is used to test WFSC. Credit: NASA/Northrop Grumman/Ball Aerospace

The WFSC system is put to work when the telescope takes digital pictures of a star. It then processes the images through mathematical algorithms to calculate the mirror adjustments required to bring the stellar image into focus. When the individual mirrors are properly aligned, the Webb Telescope will be able to obtain extraordinarily sharp images and detect the faint glimmer of a distant galaxy.

Recently, a team of engineers from Ball Aerospace & Technologies Corp., Boulder, Colo. and NASA successfully tested the WFSC algorithms, proving they are ready to work on the Webb Telescope in space. The algorithms were tested on a detailed scale model of the 6.5 meter space telescope and through computer simulations.

"This major technological accomplishment, which built on the legacy of software algorithms used to fix the Hubble Space Telescope and align the Keck telescope, is a major step forward in the development of JWST. This achievement was the result of great teamwork between Ball Aerospace, NASA Goddard Space Flight Center, and the Jet Propulsion Laboratory," said John Mather, Senior Project Scientist on the Webb telescope at Goddard and the 2006 winner of the Nobel Prize in Physics. 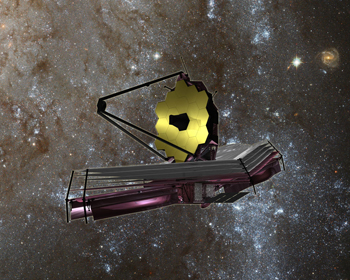 The Webb Telescope is designed to study the faint light from objects at the farthest reaches of space and time.

SPIE is an international society advancing an interdisciplinary approach to the science and application of light. This conference and exhibition focuses on where optical engineering meets emerging technologies of nanotechnology and science, photonic devices and solar energy and their applications.