R.I.P. TOMS: NASA Ozone Instrument Laid to Rest After Three Decades
During its almost 30-year lifespan, the Total Ozone Mapping Spectrometer (TOMS) program provided unique and valuable information that shaped public policy and international perspectives on the environment. The instrument was important because its data established the geographical extent of the "ozone hole" over the Antarctic, and monitored its year-to-year evolution.

With the recent decommissioning of the last of the three TOMS instruments, Earth Probe TOMS, the TOMS program closed on May 30, 2007. The legacy TOMS leaves behind will not be forgotten. 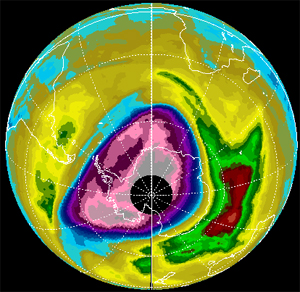 Image right: The ozone hole over the Antarctic in the year 2000, as seen by Earth Probe TOMS. Click image to enlarge. Credit: NASA

The TOMS program began with the launch of TOMS Flight Model No. 1 on the Nimbus-7 spacecraft on October 24, 1978. NASA scientists originally designed the instrument to study weather patterns by mapping global ozone. They quickly realized that some of the data collected by TOMS was much more significant than they initially had imagined.

The instrument gave scientists a tool for studying ozone in the upper and lower atmosphere in a way that had never been done before, more frequently and with far greater detail. The TOMS instrument captured a vast number of images of the ozone daily, which allowed scientists to constantly monitor changes in the ozone. The capability to measure long-term trends with the TOMS instrument series has been critical to international ozone assessment activities.

Ozone that surrounds the Earth in the upper atmosphere acts as protection from the sun’s harmful ultraviolet rays. A thinning of the upper ozone layer would put people at greater risk for skin cancer, cataracts and impaired immune systems. Ozone in the lower atmosphere, close to Earth’s surface, is a pollutant that causes damage to lung tissue and plants. 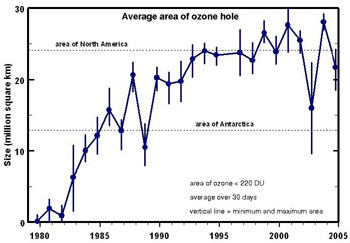 "TOMS was unique because it was a total ozone mapper. It measured ozone on every spot on the Earth every day. That is why it was so valuable, it saw everything," said Richard McPeters, the principal investigator for Earth Probe TOMS, at NASA’s Goddard Space Flight Center, Greenbelt, Md. McPeters worked on TOMS from the earliest days of the program.

The data from the TOMS instrument were critical to the detection of long-term damage to the ozone layer over long periods of time, including above heavily populated areas. These discoveries led to the passage of the Montreal Protocol in 1987, an international agreement restricting the production of ozone-depleting chemicals. 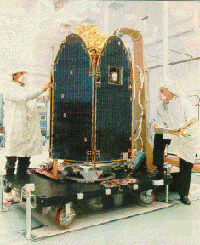 Image right: The Earth Probe TOMS instrument before its launch in 1996. Credit: NASA

TOMS data were also key in confirming the destruction of the ozone at the South Pole each year, the "ozone hole," which is now an annual occurrence.

The final leg of the TOMS program was launched in July of 1996. This TOMS instrument, aboard the Earth Probe spacecraft, was placed at a lower altitude than its predecessors. The lower orbit allowed Earth Probe TOMS to provide better resolution for viewing smaller phenomena, like volcanoes, forest fires and sources of pollution. This instrument took almost 200,000 measurements daily, covering nearly the entire planet. 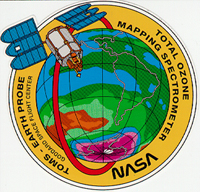 Edward Chang, the contracting officer’s technical representative from Goddard, says that even though the TOMS mission has ended, the collaboration between NASA and Capitol College continues. The college took the lead in decommissioning Earth Probe TOMS on May 30, 2007. 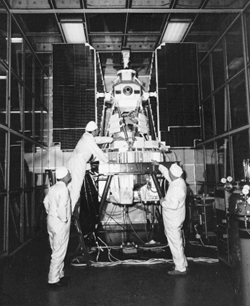 Image right: The Nimbus-7 spacecraft, which carried the first TOMS instrument, before its launch in 1978. Click image to enlarge. Credit: NASA

Following failure of the transmitter in late 2006, TOMS was no longer able to send its data back to the scientists on the ground, so continuing to operate the instrument was useless. The spacecraft will remain in its current orbit, but with all fuel and other energy sources cut off. It will take 37 years for the spacecraft to re-enter the atmosphere.

The Ozone Monitoring Instrument, a more advanced spectrometer that flies on the Aura satellite, has taken over the work done by the TOMS program. Launched in 2004, this instrument was created through collaboration between Goddard and the Netherlands Agency for Aerospace Programs working with the Finnish Meteorological Institute. Like TOMS, the Ozone Monitoring Instrument records total ozone and other atmospheric data related to ozone chemistry and climate.

TOMS delivered some of the most critical and influential environmental data ever recorded, documenting the long-term decline of global ozone levels and the emergence and development of the Antarctic ozone hole. It allowed the world to view and understand ozone in a new way, helping to shape international environmental perspectives and policy.

The program’s legacy, according to McPeters, lies in the incredibly detailed information TOMS provided for examining changes in the ozone layer. "People got used to being able to view the Earth the way TOMS viewed it, seeing a global image of the ozone in high resolution every day. At this point, as a result of TOMS, that view is now considered a necessity."