"Towering" Achievement for Goddard's Visualization Studio
"Towers in the Tempest," a NASA visualization that illustrates the complex science of hurricane hot towers, has been selected for an award by the National Science Foundation (NSF) and Science Magazine's fifth annual International Science and Technology Visualization Challenge.

Science Magazine, published by the American Association for the Advancement of Science (AAAS), invited illustrators, photographers, computer programmers, and graphic specialists from around the world to submit their unique work. Science and technology visualizers from 23 countries rose to the challenge, and "Towers in the Tempest" was selected for an honorable mention from a pool of more than 200 entries. It was produced by NASA's Scientific Visualization Studio, located at the NASA Goddard Space Flight Center, Greenbelt, Md.

Jeff Nesbit, director of NSF's Office of Legislative and Public Affairs, applauded the winners for the innovation and insight demonstrated in their varied work. In a statement to be released September 28, Nesbit stressed the value of these visual aids and said their ability to engage an audience and effectively communicate complex science is unmatched. "Breakthrough moments in science and engineering are often portrayed in movies and literature as 'ah-ha!' moments," he said. "What these artists and communicators have given us are similar experiences, showing us how bats fly or how nicotine becomes physically addictive. We look at their visualizations, and we understand." 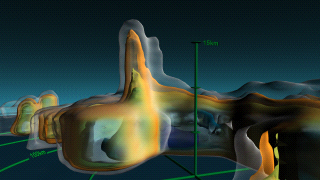 Breaking down a complex scientific topic and discerning how to make it visually palpable is no small feat, but Goddard's team of science visualizers rise to the challenge on a daily basis. Greg Shirah served as lead visualizer on "Towers in the Tempest," collaborating with NASA Goddard hurricane researcher Scott Braun. The visualization was first released on May 10, 2007. It was included in the Discovery Channel program called "Earthshocks: Hyper Hurricanes," which aired on Sept. 21, 2007.

"We worked closely with a research scientist to develop a solid script and storyboard that was strongly tied to visuals," explained Shirah. "We were then able to carefully create a continuous-shot visualization that moves from observed data, to illustrations of scientific understanding, to computational model data." 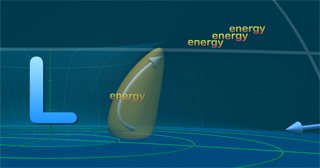 Image right: Hot towers act like "express elevators," accelerating the movement of energy up into a hurricane. Credit: NASA/SVS

To devise the visualization, Shirah and Braun used data observed from the Tropical Rainfall Measuring Mission (TRMM), a NASA spacecraft that observes weather with the world's only space-based precipitation radar. TRMM examines the internal structure of clouds, and its measurements revealed a dramatic cloud feature in the structure of Hurricane Bonnie. TRMM data revealed towering rain clouds nestled by the hurricane's eye that nearly reached Earth's stratosphere. Now known as "hot towers," the newly discovered features are providing scientists with fascinating new insights on hurricanes.

While TRMM's hot tower data is staggering on its own, the visible towers Shirah and his team have crafted enable a deeper understanding of the unique features. "Visualizations are extremely important in communicating science as well as in conducting research," Shirah said. "Vast amounts of data are often used in conducting scientific research. Once new discoveries are made, visualizations can distill subsets of the data into carefully designed images that communicate the science stories." A visual image can communicate a powerful response in a viewer. "In my experience, science stories are most successful when accompanied by insightful visualizations," Shirah said. 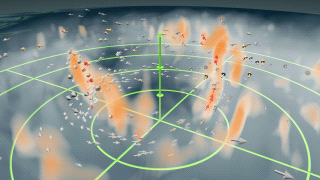 Image left: The winds and updrafts continue to change in the hurricane. The green circles are 50 kilometers (km), 100 km, 150 km, and 200 km from the center of the simulation. Credit: NASA/SVS

The mission of the Scientific Visualization Studio is to facilitate scientific inquiry and outreach within NASA programs through visualization. To that end, the SVS works closely with scientists in the creation of visualization products, systems, and processes in order to promote a greater understanding of Earth and Space Science research activities at the Goddard Space Flight Center and within the NASA research community.

Shirah and his team have much to be proud of. Their science visualizations continue to improve scientists' ability to work with and understand data. Their efforts are attracting well-deserved attention. Winning an award at the International Science and Technology Visualization Challenge is a towering achievement indeed.