NASA's STEREO Mission, the scientists involved and the vital information that they gather and study, is being presented in a new digital 3D film titled "3D Sun." 3D Sun will bring these images to the world in a way that has only been imagined before. 3D Sun opened at the Boston Museum of Science the first week of September.

"3D SUN" audiences will experience the Sun in a breath-taking 3D High Definition motion picture format and join the crew responsible for a historic new mission to the Sun--a pair of NASA spacecraft named STEREO. The story unfolds above the arctic circle as viewers witness the most brilliant auroras on Earth captured for the first time in stunning High Definition 3D; take a ride on a solar blast from the Sun’s surface to Earth and come to a deeper understanding of what this vast sea of fire means to life here on Earth.

"If we took you any closer to the Sun, you'd overheat," says Lika Guhathakurta of NASA HQ in Washington DC. "Our 3D images transport viewers into the heart of violent solar storms. It's exciting--and a little terrifying." 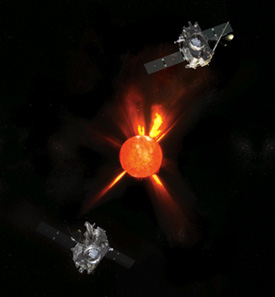 NASA's Solar Extraterrestrial Relations Observatory (STEREO) satellites have given the world 3D views of the sun for the first time. The twin satellites were launched on a Delta II rocket on October 25, 2006 from Cape Canaveral Air Force Station, Florida and are now orbiting the Sun.

The two STEREO observatories are not large, about the size of a golf cart.

During the two-year mission, the STEREO Program will explore the origin, evolution and interplanetary consequences of coronal mass ejections (CMEs), which are among the most violent explosions in our solar system.

The billion-ton eruptions can, when directed towards us, create havoc on our communications and power systems, and disrupt satellites. At the same time, they can produce spectacular Northern and Southern lights, which are seen frequently in our planet's polar regions. During severe storms, these lights can descend as far south as California or Florida.

3D Sun will inform audiences how STEREO will contribute to a better understanding of CME's, and the effect these events have on space weather and our lives. Scientists will be able to better predict potentially catastrophic space weather events, so that Earth-based systems can take necessary steps to mitigate the harmful effects.

The movie opened at the Boston Museum of Science September 7 and will run for a year.

3D Sun was released to digital 3D and 4D theaters in museums, zoos, aquariums and other digitally equipped venues on July 18, 2007. The world premiere was held at the new Liberty Science Center digital 3D theater in Jersey City, New Jersey.

The film is supported by a teacher's guide that contains lesson plans and curriculum that teachers and students can utilize to deepen their understanding film's concepts. The teacher's guide and more information relating to the film and the STEREO mission can be found at the film's web site: + 3D Stereo Film website

3D Sun is a Melrae Pictures Production. It was produced in Association with K2 Communications. It was directed by Melissa R. Butts and Barry Kimm and produced by Melissa Butts. The executive producer was Ed Capelle and Mark Kresser. The film was developed with the cooperation of the NASA Science Mission Directorate, Heliophysics Division.