NASA researchers will present findings on a variety of photo-optical and engineering topics, such as the James Webb Space Telescope, at the Optics and Photonics meeting of the Society for Photo-Optical Instrumentation Engineers (SPIE). The meeting runs Sunday through Thursday, August 26-30, at the San Diego Convention Center, 111 West Harbor Drive, San Diego, Calif. Sessions are open to the media. The Media Center is located at the top of the escalator on the second floor. 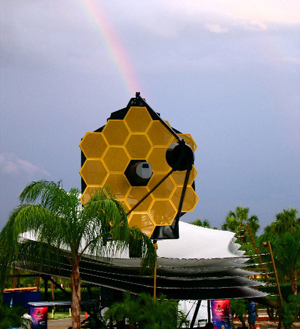 Image right: The life-sized model of the James Webb Space Telescope was on display last year at the International Society for Optical Engineering's (SPIE) Astronomical Telescopes and Instrumentations conference. The conference ran from May 26-30, 2006, and was held in Orlando, Fla. Credit: NASA

Many of the presentations NASA will make at the meeting involve the James Webb Space Telescope (JWST). JWST is a 21st-century space observatory that will peer back more than 13 billion years in time to understand the formation of galaxies, stars and planets and the evolution of our own solar system. It is expected to launch in 2013. The telescope is a joint project of NASA, the European Space Agency and the Canadian Space Agency.

Here is a sampling of the JWST-related NASA presentations:

Technology Demonstration of Large Stable Cryogenic Composite Structures for JWST
DATE, TIME, LOCATION: Sunday, Aug. 26, 9:20 a.m. – 9:40 a.m. PDT in 29B
SESSION: Paper 6687-2 of Conference 6687
SUMMARY: Learn how scientists are able to maintain stability in JWST's structure over time while at cryogenic temperatures in the extremes of space. As the culmination of a series of development efforts, a thermal stability test was performed on the Backplane Stability Test Article, demonstrating Technology Readiness Level (TRL-6) status for the design, analysis, and testing of Large Precision Cryogenic Structures. This presentation will describe the test results.

TRL-6 for JWST Wavefront Sensing and Control
DATE, TIME, LOCATION: Sunday, Aug. 26 from 11:30 a.m. - 11:50 a.m. PDT in 29B
SESSION: Paper 6687-7 of Conference 6687
SUMMARY: The JWST's Wavefront Sensing and Control subsystem achieved NASA’s TRL-6. The WFSC subsystem is needed to align the Optical Telescope Element after all deployments have occurred, ensuring that the 18 individual segments than make up the Primary Mirror are optimally configured to act as one large mirror. This presentation describes the technology, finished TRL-6 design, test results and science goals. 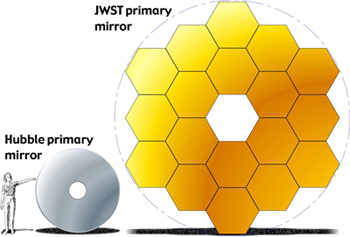 Image above: JWST will have a 6.6-meter (21.65 feet) diameter primary mirror, which would give it a significantly larger collecting area than the mirrors available on the current generation of space telescopes. Hubble Space Telescope's mirror is a much smaller 2.4 meters (7.8 feet) in diameter. Credit: NASA

JWST Mirror Technology Development Results
DATE, TIME, LOCATION: Tuesday, Aug. 28 from 8:00 a.m. – 8:20 a.m. PDT in 25A
SESSION: Paper 6671-1 of Conference 6671
SUMMARY: Mirror technology is critical for JWST's success. The Primary Mirror Segment Assembly must survive launch, and deploy and align itself to form a 25 square meter collecting area, 6.5-meter diameter primary mirror. At the inception of JWST in 1996, such a capability did not exist. Learn about the highly successful technology that created the prototype that has been successfully tested and operated.

Production Status of the JWST Primary Mirror Segments at Tinsley
DATE, TIME, LOCATION: Tuesday, Aug. 28, 8:20 a.m. – 8:40 a.m. PDT in 25A
SESSION: Paper 6671-2 of Conference 6671
SUMMARY: Learn about the production of the JWST primary mirror segments at Tinsley Laboratories. The flight segments have been delivered to Tinsley and they have started the fabrication sequence. The mirror segments are lightweighted hexagons, made from O-30 Beryllium. Hear about lessons learned on processing from the Engineering Development Unit, and what's next with cryogenic testing at the NASA Marshall Space Flight Center X-Ray Calibration Facility.

Hunting Planets and Observing Disks With the JWST NIRCam Coronagraph
DATE, TIME, LOCATION: Wednesday, Aug. 29 from 11:00 a.m. – 11:20 a.m. PDT in 29B
SESSION: Paper 6693-16 of Conference 6693
SUMMARY: Learn how the NIRCam instrument on JWST will be able to detect hot Jovian-mass companions orbiting young stars within 150 parsecs, as well as "Jupiters" around the nearest, low-mass stars. It will also be used to study protostellar and debris disks. Hear how the NIRCam gives JWST significant advantages over large ground-based telescopes equipped with adaptive optics.

SPIE is an international society advancing an interdisciplinary approach to the science and application of light. This conference and exhibition focuses on where optical engineering meets emerging technologies of nanotechnology and science, photonic devices and solar energy and their applications.