NASA Researcher Finds Days of Snow Melting on the Rise in Greenland
In 2006, Greenland experienced more days of melting snow and at higher altitudes than average over the past 18 years, according to a new NASA-funded project using satellite observations. 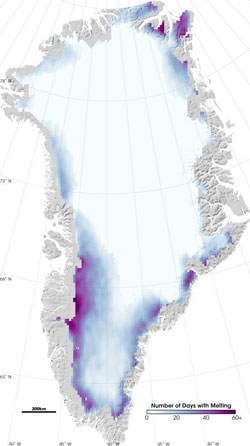 Image right: Satellite imagery shows the number of days in 2006 when melting occurred. The darker color blue areas had the most days of melting. Click image to enlarge. Credit: NASA/Robert Simmon and Marit Jentoft-Nilsen

Daily satellite observations have shown snow melting on Greenland’s ice sheet over an increased number of days. The resulting data help scientists understand better the speed of glacier flow, how much water will pour from the ice sheet into the surrounding ocean and how much of the sun’s radiation will reflect back into the atmosphere.

“We now have the ability to monitor melting snow on Greenland’s ice sheet on a daily basis using sensors on satellites measuring the electromagnetic signal naturally emitted by the ice sheet,” said Marco Tedesco, research scientist at the Joint Center for Earth Systems Technology cooperatively managed by NASA’s Goddard Space Flight Center, Greenbelt, Md., and the University of Maryland at Baltimore County, Baltimore.

“The sensors detected that snowmelt occurred more than 10 days longer than the average over certain areas of Greenland in 2006,” said Tedesco, who is lead author of the study, which appears in the May 29 issue of the American Geophysical Union's Eos.

Tedesco applied a new method for detecting melting snow to data from the Special Sensor Microwave Imaging radiometer (SSM/I) flying aboard the Defense Meteorological Satellite Program spacecraft. The sensor can see through clouds and does not require sunlight to make measurements, providing researchers with multiple daily observations. Tedesco has updated the results annually since 1988, which has enabled him to analyze trends in the duration of snowmelt and extent over specific areas of Greenland.

To understand why these trends are important to track, Tedesco explained one of the consequences of melting snow. “Although wet and dry snow look similar at first glance, wet and re-frozen snow absorb more of the sun’s radiation, reflecting only 50-60 percent back into the atmosphere. Dry snow, on the other hand, reflects about 85 percent of the sun’s radiation,” he said. "In other words, melting snow absorbs three to four times as much energy as dry snow, greatly affecting Earth’s energy budget."

The Earth’s energy budget refers to the balance between incoming sunlight and outgoing radiant energy. 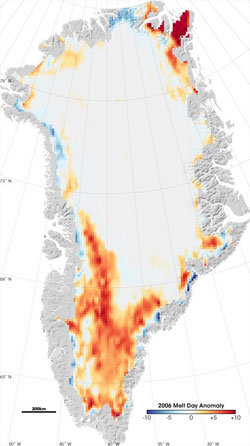 Image left: The number of days that melting took place in 2006 was more than the average between 1988 and 2005. The darker red areas indicate the anomaly, the number of days beyond the average. Click image to enlarge. Credit: NASA/Robert Simmon and Marit Jentoft-Nilsen

Greenland's melting snow can have a major impact on the vast ice sheet and on sea level around the world. “The melting snow produces liquid water that will potentially influence sea levels,” said Tedesco. “And some of the liquid water will drain into the glaciers through cracks and vertical passages, called moulins, reaching the bedrock below and lubricating the ice sheet."

Previous studies by NASA Goddard researchers Jay Zwally and Waleed Abdalati have also observed that the water from summer melting at the ice sheet's base can increase how fast the ice moves, causing it to contribute more rapidly to sea level than previously thought. This phenomenon, together with others recently observed, suggest that the ice might respond more quickly to a warming climate.

To estimate the overall impact on Greenland's snow, Tedesco's study calculated a "melt index," which is the number of melting days multiplied by the melting area. The 2006 data followed the increasing trend from 1988 to 2005. Areas along Greenland’s western, southeastern and northeastern coast witnessed the largest number of melt days in 2006.

“The International Polar Year’s focus on this part of the world gives us an ideal opportunity to combine research results on snowmelt from satellites as well as from climate models to better understand how melting is really affecting the mass balance of Greenland’s ice sheet. We need to link all of this data together to get a better view of this complex system.”