High-Energy 'Relic' Wind Reveals Past Behavior of Dead Stars
A team of astronomers from France and South Africa announced the first catalog of a new type of gamma-ray source, a dozen clouds of “relic” radiation from dead stars that reveal information about the energetic past of these celestial objects. 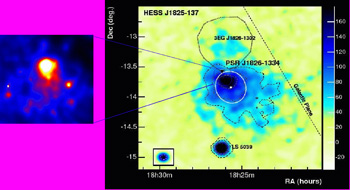 Image right: One of the most remarkable "relic" gamma-ray clouds of the new catalog, the source HESS J1825-137 which is 100 light-years across. The zoomed box shows the much smaller X-ray nebula (data from the XMM-Newton satellite), surrounding the middle-aged (21000 years old) pulsar PSR B1823-13. Credit: Astroparticule et Cosmologie (APC), CNRS

Djannati-Ataï, Drs. Anne Lemière and Régis Terrier, also from the APC, and Prof. Okkie de Jager from Space Unit, North Western University, in Potchefstroom, South Africa, are members of the High Energy Stereoscopic System (H.E.S.S.), a multi-national collaboration that made this finding. H.E.S.S. is a group of four 40-foot telescopes located in Namibia, Africa.

This catalog of “relic” nebulae was obtained through detailed study and modeling of sources discovered during 2004 and 2005 by the H.E.S.S. collaboration.

The very high-energy gamma rays detected by H.E.S.S. appear to be coming from regions near to pulsars - rapidly spinning ultra-dense objects created when a massive star explodes as a supernova - but not close enough to be produced directly by the pulsars themselves. While it has been known previously that pulsars emit a “wind” of particles, it had not been thought that the extent of gamma-ray emission from the wind could be on this large a scale: many of these objects are surrounded by a gamma-ray glow many dozens of light years across.

Djannati-Ataï and other team members have shown that these winds, which are powered by the pulsar over all its lifetime, are indeed the source of these very energetic gamma rays.

Pulsars, first discovered in 1967, are the extremely dense remnants of exploded stars, which typically have a mass that is 1.4 times that of the Sun squeezed down into a ball only a few miles across. Pulsars have very strong magnetic fields, billions and even trillions as times as powerful as the Earth’s. This incredible magnetism can accelerate electrons to speeds to very nearly that of light. When such an electron slams into a particle of light (a photon), the photon can pick up the energy of the electron in a process known as “inverse Compton scattering.” An ordinary photon of light can be energized tremendously, becoming a super-high-energy gamma ray. The gamma rays detected by H.E.S.S. have a trillion times the energy of visible light.

Winds from pulsars have been known for many years. The most famous example is that from the pulsar in the center of the Crab Nebula, a bright cloud of expanding gas from a star that exploded in the year 1054. In that case, the wind generates X-rays (which have less energy than gamma rays) through synchrotron radiation and gamma rays through the inverse Compton scattering. These X-rays and gamma rays are seen coming from gas a few light years across at most.

The objects detected by the H.E.S.S. team are far more extended. The glow of gamma rays seen from the pulsar PSR B1823-13, for example, is approximately 100 light years across. A light year is the distance a particle of light, traveling 186,000 miles per second travels in one year.

The larger size of this gamma-ray emitting region means the electrons producing the gamma rays have traveled further and so come from a period earlier in the pulsar’s history. This in turn means that studying the gamma rays from pulsar winds can give astronomers insight into the history of the pulsar itself and how its magnetic field has changed over the past tens of thousands of years.

Commenting on these results, Djannati-Ataï said, "About half of the sources discovered by H.E.S.S. in the central parts of the Galactic Plane are most likely large relic gamma-ray nebulae associated with middle-aged pulsars: these nebulae should then constitute a major component of the very high energy gamma-ray sky. Further observations in radio, X-rays, gamma-rays and detailed studies of these objects should confirm further these results and yield precious insights on the evolution of the pulsars and their nebula including constraints on the magnetic field evolution with time.”

This presentation was made at the GLAST meeting, as the research is relevant to this upcoming mission. Observations with GLAST would aid greatly in understanding the physics of these objects, filling a gap in the energies detected by other telescopes. GLAST is due for launch in late 2007. It is a collaborative effort between NASA, the U.S. Department of Energy and institutions in France, Germany, Japan, Italy and Sweden. General Dynamics has been chosen to build the spacecraft.