Long-Term Increase in Rainfall Seen in Tropics
NASA scientists have detected the first signs that tropical rainfall is on the rise with the longest and most complete data record available. 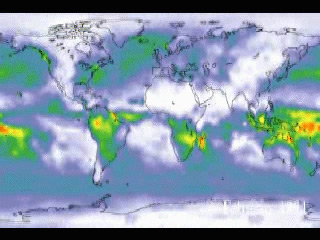 Animation right: Capturing a global view of Earth's rainfall patterns is a challenging work-in-progress. The Global Precipitation Climatology Project brings together data from 1979 to the present for the best-available data record. This animation shows the pulsing month-to-month rainfall totals from 1979 to 2005 (areas of yellow and red are high rainfall; white and light grey areas are low). Credit: NASA's Earth Observatory
+ View animation (Windows)
+ View animation (Real)

Using a 27-year-long global record of rainfall assembled by the international scientific community from satellite and ground-based instruments, the scientists found that the rainiest years in the tropics between 1979 and 2005 were mainly since 2001. The rainiest year was 2005, followed by 2004, 1998, 2003 and 2002, respectively.

"When we look at the whole planet over almost three decades, the total amount of rain falling has changed very little. But in the tropics, where nearly two-thirds of all rain falls, there has been an increase of 5 percent," says lead author Guojun Gu, a research scientist at Goddard Space Flight Center in Greenbelt, Md. The rainfall increase was concentrated over tropical oceans, with a slight decline over land.

Climate scientists predict that a warming trend in Earth's atmosphere and surface temperatures would produce an accelerated recycling of water between land, sea and air. Warmer temperatures increase the evaporation of water from the ocean and land and allow air to hold more moisture. Eventually, clouds form that produce rain and snow.

"A warming climate is the most plausible cause of this observed trend in tropical rainfall," says co-author Robert F. Adler, senior scientist at Goddard's Laboratory for Atmospheres. Adler and Gu are now working on a detailed study of the relationship between surface temperatures and rainfall patterns to further investigate the possible link. The study appears in the Aug. 1, 2007, issue of the American Meteorological Society's Journal of Climate.

Image above: Over the 27 years between 1979 and 2005 some areas of the tropics experienced an increase in rainfall of as much as 0.5 millimeters per day per decade (red areas). Overall, tropical rainfall increased 5 percent during this period. Credit: Guojun Gu, NASA

Obtaining a global view of our planet's rainfall patterns is a challenging work-in-progress. Only since the satellite era have regular estimates of rainfall over oceans been available to supplement the long-term but land-limited record from rain gauges. Just recently have the many land- and space-based data been merged into a single global record endorsed by the international scientific community: the Global Precipitation Climatology Project, sponsored by the World Climate Research Program. Adler's research group at NASA produces the project’s monthly rainfall updates, which are available to scientists worldwide.

Using this global record, Gu, Adler and their colleagues identified a small upward trend in overall tropical rainfall since 1979, but their confidence was not high that this was an actual long-term trend rather than natural year-to-year variability. So they took another look at the record and removed the effects of the two major natural phenomena that change rainfall: the El Niño–Southern Oscillation and large volcanic eruptions.

El Niño is a cyclical warming of the ocean waters in the central and eastern tropical Pacific that generally occurs every three to seven years and alters weather patterns worldwide. Volcanoes that loft debris into the upper troposphere and stratosphere create globe-circling bands of aerosol particles that slow the formation of precipitation by increasing the number of small cloud drops and temporarily shielding the planet from sunlight, which lowers surface temperatures and evaporation that fuels rainfall. Two such eruptions – El Chicon in Mexico and Mount Pinatubo in the Philippines – occurred during the 27-year period.

The scientists found that during El Niño years, total tropical rainfall did not change significantly but more rain fell over oceans than usual. The two major volcanoes both reduced overall tropical rainfall by about 5 percent during the two years following each eruption. With these effects removed from the rainfall record, the long-term trend appears more clearly in both the rainfall data over land and over the ocean.

Image above: The trend of increasing rainfall over the tropics was clearer once NASA scientists removed the effects on rainfall of major volcanic eruptions and El Niño from the data record. This figure shows how much each year's tropical rainfall differed from the long-term average rainfall over the entire 27-year period. Credit: Guojun Gu, NASA

According to Adler, evidence for the rainfall trend is holding as more data come in. The latest numbers for 2006 show another record-high year for tropical rainfall, tying 2005 as the rainiest year during the period.

"The next step toward firmly establishing this initial indication of a long-term tropical rainfall trend is to continue to lengthen and improve our data record," says Adler, who is project scientist of the Tropical Rainfall Measuring Mission (TRMM), a joint mission between NASA and the Japan Aerospace Exploration Agency. The three primary instruments on TRMM are currently providing the most detailed view of rainfall ever provided from space. Adler's group has been incorporating TRMM rainfall data since 1997 into the global rainfall record.

NASA plans to extend TRMM's success of monitoring rainfall over the tropics to the entire globe with the Global Precipitation Measurement mission, scheduled for launch in 2013. This international project will provide measurements of both rain and snow around the world with instruments on a constellation of spacecraft flying in different orbits.