Using European and Japanese/NASA X-ray satellites, astronomers have seen Einstein’s predicted distortion of space-time around three neutron stars, and in doing so they have pioneered a groundbreaking technique for determining the properties of these ultradense objects.

Image right: An artist depicts a disk of hot gas whipping around a neutron star. The gas in the inner part of the disk whirls around the neutron star at about 40 percent the speed of light, so fast that it experiences effects predicted by Einstein's theories of relativity. Superheated iron atoms in this region emit X-rays at a characteristic wavelength, but the spectral feature is highly distorted by the relativistic effects. Credit: NASA/Dana Berry.

Neutron stars contain the most dense observable matter in the universe. They cram more than a sun’s worth of material into a city-sized sphere, meaning a few cups of neutron-star stuff would outweigh Mount Everest. Astronomers use these collapsed stars as natural laboratories to study how tightly matter can be crammed under the most extreme pressures that nature can offer.

"This is fundamental physics," says Sudip Bhattacharyya of NASA’s Goddard Space Flight Center in Greenbelt, Md. and the University of Maryland, College Park. "There could be exotic kinds of particles or states of matter, such as quark matter, in the centers of neutron stars, but it’s impossible to create them in the lab. The only way to find out is to understand neutron stars."

To address this mystery, scientists must accurately and precisely measure the diameters and masses of neutron stars. In two concurrent studies, one with the European Space Agency’s XMM-Newton X-ray Observatory and the other with the Japanese/NASA Suzaku X-ray observatory, astronomers have taken a big step forward.

Using XMM-Newton, Bhattacharyya and his NASA Goddard colleague Tod Strohmayer observed a binary system known as Serpens X-1, which contains a neutron star and a stellar companion. They studied a spectral line from hot iron atoms that are whirling around in a disk just beyond the neutron star’s surface at 40 percent the speed of light.

Image left: Many neutron stars are accompanied by a companion star, as portrayed in this illustration. The powerful gravity of the neutron star siphons off gas from the companion, which then settles into a slowly in-spiraling disk around the neutron star. Credit: NASA.

Previous X-ray observatories detected iron lines around neutron stars, but they lacked the sensitivity to measure the shapes of the lines in detail. Thanks to XMM-Newton’s large mirrors, Bhattacharyya and Strohmayer found that the iron line is broadened asymmetrically by the gas’s extreme velocity, which smears and distorts the line because of the Doppler effect and beaming effects predicted by Einstein’s special theory of relativity. The warping of space-time by the neutron star’s powerful gravity, an effect of Einstein’s general theory of relativity, shifts the neutron star’s iron line to longer wavelengths.

"We've seen these asymmetric lines from many black holes, but this is the first confirmation that neutron stars can produce them as well. It shows that the way neutron stars accrete matter is not very different from that of black holes, and it gives us a new tool to probe Einstein’s theory," says Strohmayer.

A group led by Edward Cackett and Jon Miller of the University of Michigan, which includes Bhattacharyya and Strohmayer, used Suzaku’s superb spectral capabilities to survey three neutron-star binaries: Serpens X-1, GX 349+2, and 4U 1820-30. This team observed a nearly identical iron line in Serpens X-1, confirming the XMM-Newton result. It detected similarly skewed iron lines in the other two systems as well. 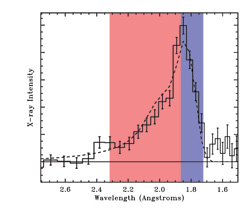 Image right: XMM-Newton observed this spectral line from superheated iron atoms orbiting the neutron star Serpens X-1 at the inner edge of an accretion disk. Normally, the line would be a symmetrical peak, but it exhibits the classic features of distortion due to relativistic effects. The extremely fast motion of the iron-rich gas causes the line to spread out. The entire line has been shifted to longer wavelengths (left, red) because of the neutron star's powerful gravity. The line is brighter toward shorter wavelengths (right, blue) because Einstein's special theory of relativity predicts that a high-speed source beamed toward Earth will appear brighter than the same source moving away from Earth. Credit: Credit: Sudip Bhattacharyya and Tod Strohmayer..

"Now that we’ve seen this relativistic iron line around three neutron stars, we have established a new technique," adds Miller. "It’s very difficult to measure the mass and diameter of a neutron star, so we need several techniques to work together to achieve that goal."

Knowing a neutron star’s size and mass allows physicists to describe the "stiffness," or "equation of state," of matter packed inside these incredibly dense objects. Besides using these iron lines to test Einstein’s general theory of relativity, astronomers can probe conditions in the inner part of a neutron star’s accretion disk.

The XMM-Newton paper appeared in the August 1 Astrophysical Journal Letters. The Suzaku paper has been submitted for publication in the same journal.