Satellites Offer Sunny Outlook on Understanding Polar Climate, With Help of Cloudy Skies
Far beyond signaling the day’s weather, clouds play a key role in regulating and understanding climate. A team of researchers recently completed a project to confirm what NASA satellites are telling us about how changes in clouds can affect climate in the coldest regions on Earth. 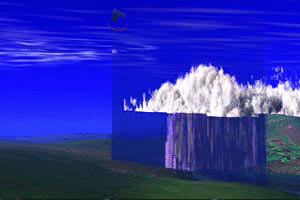 Clouds and their traits – their temperature, depth, size and shape of their droplets – play a significant role in how much of the sun's radiation reaches Earth's surface and what amount of heat energy Earth reflects back into the atmosphere. In 2006, NASA simultaneously launched a pair of satellites, CloudSat and the Cloud-Aerosol Lidar and Infrared Pathfinder Satellite Observation (CALIPSO), which together use state-of-the-art instruments as they orbit the globe to reveal detailed information about clouds and their effect on climate.

Scientists predict that certain changes in cloud properties can accelerate climate change. "The polar regions are very sensitive indicators of climate change," said Deborah Vane, project manager and deputy principal investigator for the CloudSat mission at NASA's Jet Propulsion Laboratory, Pasadena, Calif. "It's been well reported now that the polar ice caps are undergoing net melting. There's a complicated interaction between clouds and climate in polar regions that can contribute to temperature changes, and, in turn, speed the rate at which ice melts." 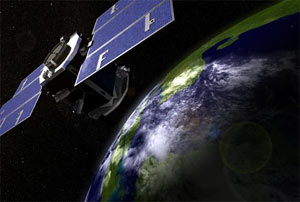 Image left: CloudSat's scientific payload collects data about the vertical structure of clouds, including the quantities of liquid water and ice, and how clouds affect the amount of sunlight that passes through. + Click for an animation of Cloudsat and CALIPSO in orbit. Animation caption: On April 28, 2006, CloudSat and CALIPSO launched into a 705-kilometer (438-mile) circular, Sun-synchronous polar orbit, where they fly just 15 seconds apart, at more than fifteen thousand miles per hour. This pairing sets a new standard in precision placement of Earth-orbiting satellites, allowing instruments on both spacecraft to look at the same clouds in the atmosphere. Considering how quickly clouds change and transform in the sky, the instruments passing overhead need to be close in order to take the measurements at nearly the same time. Credit: NASA

As part of a major experiment to unlock some of the particular mysteries of cold-season clouds, researchers from NASA; the Meteorological Service of Canada in Toronto; Colorado State University, Fort Collins; and the Desert Research Institute, Reno, Nev., employed ground-based sensors in remote areas of Canada and sensors aboard aircraft that flew over the region this winter to confirm information CloudSat and CALIPSO provided. The aircraft flew beneath CloudSat and CALIPSO 21 times during the experiment, which took place between Oct. 31, 2006, and March 1, 2007.

Researchers were surprised to find extremely high ice water content in snowstorms generated by the open waters of the Great Lakes, much higher than expected as snowstorm cloud systems are typically very shallow without ample depth to contain much ice and water content. Also, embedded layers of significant amounts of liquid water were frequently found in very cold multi-layer cloud systems – systems that were known prior to have temperatures high enough to freeze cloud water, resulting mostly in clouds laced with ice. Researchers consistently found liquid water in these clouds, which posed a new challenge to their assumptions and to models of these types of clouds.

"This campaign gives us a snapshot in time that, when combined with additional satellite information in the future, should give us more confidence in what the satellites are telling us about cloud properties," said Vane. "Are the properties of the clouds changing over time? Just how much are they changing, and what is the effect on the ground below? This research will ultimately help us understand what's happening with climate in the polar regions, a part of the world where accurate data measurements can be difficult to gather without satellites." 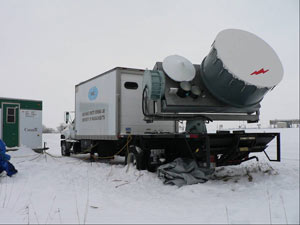 CloudSat peers into clouds from hundreds of miles above to allow researchers a sneak peek into just how cloud droplets change to become rain or snow. CALIPSO uses laser technology called lidar to gather data globally that researchers will use to analyze how clouds and aerosols affect the atmosphere.

"What's unique about this field experiment is that we're the only research group doing winter cloud validation," said David Hudak, a research scientist at the Meteorological Service of Canada, and the principal investigator of the field experiment. "Others have focused solely on confirming satellite data from warm-season clouds. Cold-season clouds have completely different traits, and it's those specific properties that contribute to some of the changes we see in climate in the Arctic and Antarctic."

Results from the Canadian field campaign will also help researchers confirm statistics in advance of a major satellite mission – NASA's Global Precipitation Measurement (GPM) satellite, set to launch in 2013 – that will measure liquid rain and seeks to detect and estimate falling snow.

"Data from this experiment will help GPM observe snow as it is falling, which is very difficult to do because snow crystals are so complex. We really want to delve into the nuances of their shape, how fast they fall, the depth of the snowfall clouds, and changes in cloud location," said physical scientist Gail Skofronick Jackson, deputy project scientist for the Global Precipitation Measurement mission at NASA's Goddard Space Flight Center, Greenbelt, Md. "This field campaign is exciting because it can help us get a better fix on how to do this as we gear up for launching GPM."

During the experiment, a turboprop aircraft carrying lidar and radar nearly identical to instruments aboard the satellites flew through snow clouds. Probes on the aircraft's wings sampled cloud and aerosol properties, including the size and shape of snowflakes and total amount of snowflakes suspended in the clouds. On the ground, the research team used dual precipitation radar, two microwave radiometers, and a host of ground sensors. Ground sensors that sampled the falling precipitation and estimated its rate and type were housed at a rural post in southern Ontario north of Toronto. 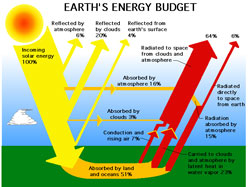 Image right: The Earth's "radiation budget" is the balance between incoming energy from the sun and the outgoing thermal reflected energy from Earth. Click on image to enlarge. Credit: NASA

"Experiments like this boost our ability to rely on the accuracy of these satellite observations," said Jackson. "At a time when nations around the globe are devoting tremendous resources to studying the polar regions as part of the International Polar Year, this experiment really gets us on the right path to learning more about the ins and outs of climate in this critical part of the world."