Proposed Mission Will Return Sample from Near-Earth Object
A menacing lump of rock and dust in space called 101955 (1999 RQ36) would barely be noticed except for two crucial facts: First, "It's a treasure trove of organic material, so it holds clues to how Earth formed and life got started," said Joseph Nuth of NASA's Goddard Space Flight Center, Greenbelt, Md. Second, it regularly crosses Earth's orbit, so it might impact us someday.

Nuth is Project Scientist for the proposed OSIRIS mission, which will "return a pristine sample of the scientifically priceless asteroid RQ36 to Earth for in-depth study," said University of Arizona Lunar and Planetary Laboratory (LPL) Director Michael Drake, Principal Investigator for the proposed mission. The mission will be the first to return a sample of an asteroid to Earth. NASA Goddard is managing the project. Lockheed Martin is building the flight system, the sampling mechanism, and the sample return capsule. Lockheed Martin is also performing spacecraft operations. 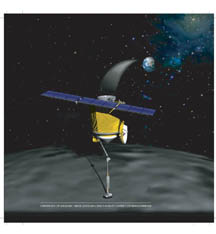 Image right: This is an artist's concept of the OSIRIS spacecraft taking a sample of asteroid RQ36. Print-resolution copy Credit: NASA/U. of Arizona

The OSIRIS team recently won a $1.2 million award from NASA to develop a more detailed engineering study of how the mission will accomplish its scientific objectives. OSIRIS will launch in 2011, acquire a sample of RQ36 in 2013, and return it to Earth in 2017.

OSIRIS is both a mythological figure and an acronym. "O" stands for the scientific theme, origins. "SI" is for spectral interpretation, or taking images of the NEO at wavelengths that will reveal its composition. "RI," or resource identification, is surveying the asteroid for such useful resources as water and metals. "S" stands for security, learning how to predict the detailed motion of Earth-approaching asteroids.

"OSIRIS of Egyptian mythology is the god of life and fertility, the god who taught Egyptians agriculture," said Dante Lauretta, OSIRIS Deputy Principal Investigator, also with the University of Arizona. "There's an analogy to the proposed 21st century space mission. We're looking at the kind of object that we think brought life to Earth; that is, objects that seeded Earth with early biomolecules, the precursors of life."

Returning a sample to Earth will allow for a much more comprehensive study of the NEO, according to the team. "The equipment in my lab is small, merely desk-sized, but that's not easy to fly. Let alone the enormous synchrotrons, which dwarf cars and are impossible to fly," said Jason Dworkin, also of NASA Goddard, who is the Deputy Project Scientist and a Co-Investigator on OSIRIS. "Furthermore, there are also a lot of steps to prepare a sample. That would all have to be automated and work perfectly on a spacecraft."

"Also, you can't respond to surprises with the limited equipment on board a spacecraft," added Nuth. "About thirty years ago, the Viking landers scooped up a sample of Martian dirt and tested it for signs of microscopic life. The results were contradictory, and ever since then, there's been a controversy over whether there really was life or whether it was just some kind of exotic chemical reaction. If instead we were able to return samples to Earth, we could have tested the sample in other ways. And when technology improves, we just take samples out and test with the latest equipment. That's what we'll be able to do with the sample returned by OSIRIS."

OSIRIS samples will be available to the world-wide community, so people with diverse skills and techniques can offer unique insights. "The Stardust mission returned samples of comet Wild 2 with a total weight of just a tenth of a milligram, but it is enough to be analyzed by researchers all over the world," said Dworkin. "OSIRIS will return 150 grams -- about five ounces. We'll take it apart almost atom by atom. It will keep a lot of people busy for a long time."

RQ36 is roughly 580 meters in diameter, or about two-fifths of a mile. It orbits between about 83 million and 126 million miles from the sun, swinging within about 280,000 miles of Earth orbit, or roughly 40,000 miles more distant than the moon. The International Astronomical Union's Minor Planet Center has officially classified RQ36 as a "potentially hazardous asteroid."

"It doesn't present any near-term hazard, but the small Yarkovsky push over hundreds of orbits may eventually be enough to cause an 'oops'," said Nuth.

The OSIRIS proposal was among approximately two dozen submitted in response to NASA's Discovery Program 2006 Announcement of Opportunity in April. NASA also selected two other proposed new Discovery-class missions, and three more Discovery-class proposals that would make use of existing NASA spacecraft, for concept development funding. NASA may select one or more investigations to continue into a development effort after detailed review of the concept studies. Decisions about which mission concepts will proceed to development are expected in late 2007.