National Radio Observatory Teams With NASA Gamma-Ray Satellite
The National Radio Astronomy Observatory (NRAO) is teaming with NASA's upcoming Gamma-ray Large Area Space Telescope (GLAST) to allow astronomers to use both the orbiting facility and ground-based radio telescopes to maximize their scientific payoff. Under the new, streamlined process, astronomers can compete for coordinated observing time and support from both GLAST and NRAO's radio telescopes. 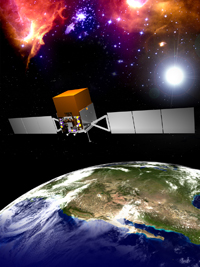 GLAST is scheduled for launch no earlier than December 14. It will perform a survey of the entire sky at gamma-ray wavelengths every 3 hours using its primary instrument, the Large Area Telescope (LAT). NRAO operates the Very Large Array (VLA) in Socorro, N.M., the continent-wide Very Long Baseline Array (VLBA), and the Robert C. Byrd Green Bank Telescope (GBT) in Green Bank, W.V. The NRAO is a research facility of the National Science Foundation (NSF).

GLAST will be vastly more capable than previous gamma-ray satellites, and will carry the GLAST Burst Monitor, specifically designed to detect gamma-ray bursts. GLAST observers will study objects such as active galaxies, pulsars, and supernova remnants, which are also readily studied with radio telescopes. By working together, NASA's GLAST mission and NSF's NRAO facilities can study flares from blazars, a very compact and highly variable energy source associated with a supermassive black hole at the center of a host galaxy, over the widest possible range of energies. This is crucial to understanding how black holes, notorious for drawing in matter, can accelerate jets of material to nearly light speed. 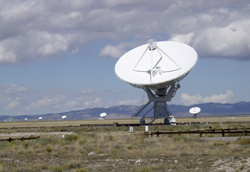 Image left: The Very Large Array, one of the world's premier astronomical radio observatories, consists of 27 radio antennas in a Y-shaped configuration on the Plains of San Agustin fifty miles west of Socorro, New Mexico. Each antenna is 25 meters (82 feet) in diameter. Image Credit: Robert Naeye.

"The gamma-ray and radio observations will show scientists different aspects of many still-mysterious objects and processes. By providing a simple procedure for astronomers to win observing time on radio telescopes to follow up on our new gamma-ray discoveries, we're ensuring that we get the maximum scientific return from both," said GLAST project scientist Steve Ritz of NASA's Goddard Space Flight Center in Greenbelt, Md. "The importance of this coordinated approach has been highlighted by a recent two-day workshop at Goddard, in which we discussed the scientific benefits and coordination of radio Very Long Baseline Interferometry observations made in conjunction with GLAST."

Image right: This is a close-up of one of the 27 radio antennas of the Very Large Array. Image Credit: Robert Naeye.

NRAO's radio telescopes have been used for many years as part of multiwavelength observing programs in conjunction with both ground-based and space-based observatories. Usually, however, astronomers had to submit separate observing proposals to two or more review committees, with no guarantee that they would win observing time on all desired telescopes.

Astronomers, including those on a recent NSF Senior Review panel, have urged reductions in administrative barriers to gaining observing time at multiple wavelengths. "This NRAO-GLAST agreement eases the process of winning observing time on NRAO telescopes to complement the GLAST all-sky gamma-ray survey. In particular, the continent-wide VLBA is the only existing radio telescope that can image and monitor the sites of extreme gamma-ray flares in distant galaxies," said Jim Ulvestad, NRAO's Director for VLA-VLBA Operations. "We expect to see arrangements like this become much more common in the future, to the benefit of the science." 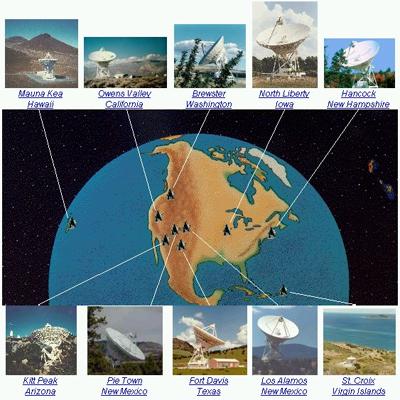 Image above: The Very Long Baseline Array (VLBA) is a system of ten radio-telescope antennas, each with a dish 25 meters (82 feet) in diameter and weighing 240 tons. From Mauna Kea on the Big Island of Hawaii to St. Croix in the U.S. Virgin Islands, the VLBA spans more than 5,000 miles, providing astronomers with the sharpest vision of any telescope on Earth or in space. VLBA has an ability to see fine detail equivalent to being able to stand in New York and read a newspaper in Los Angeles. Image Credit: NRAO.

The National Radio Astronomy Observatory is a facility of the NSF, operated under cooperative agreement by Associated Universities, Inc.