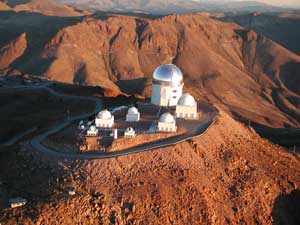 The GLAST-NOAO agreement will enable astronomers to propose for funding from GLAST to observe interesting objects in vastly different regions of the electromagnetic spectrum. If a proposal passes GLAST’s peer-review process, NOAO will grant observing time on one or more of its telescopes without requiring the researchers to submit a separate observing proposal. This arrangement streamlines the approval process, since for most observations researchers will only have to submit one peer-review proposal instead of two.

"This is a win-win situation, fostering important connections between scientific communities and organizations," says GLAST project scientist Steve Ritz of NASA Goddard Space Flight Center, Greenbelt, Md. "Every part of the spectrum tells a different story. Having simultaneous observations will lead to breakthroughs in our understanding of some of the most powerful phenomena in the universe."

"This agreement helps promote the natural synergy between space and ground-based telescopes by making it easier for astronomers to propose observations across multiple wavelengths, using a wide variety of instruments," says Buell Jannuzi, Director of Kitt Peak.

"We are excited to add GLAST to the proposal system managed by NOAO, which includes observing time on the Hubble Space Telescope, the Spitzer Space Telescope, and the Chandra Observatory," adds NOAO Interim Director Todd Boroson.

The GLAST-NOAO agreement, signed on August 20, is similar to a partnership established in May between GLAST and the National Radio Astronomy Observatory.

GLAST is scheduled to launch in early 2008. Its primary instrument, the Large Area Telescope (LAT), will survey the entire sky every three hours. The other instrument, the GLAST Burst Monitor (GBM), will detect roughly 200 gamma-ray bursts year, complementing NASA’s Swift mission. GLAST will be dramatically more sensitive to high-energy gamma-rays phenomena whose existence was hinted at by previous satellites. GLAST will study exotic objects such as pulsars, solar flares, and supernova remnants, and will possibly find signals from annihilating dark-matter particles and indications of new physics.

By working together, NASA’s GLAST mission and NOAO facilities (which are funded largely by the National Science Foundation) can study objects such as active galactic nuclei that occasionally give off stupendously energetic flares. NOAO’s telescopes may be used to catch the optical afterglows of gamma-ray bursts observed by GLAST, which will help scientists unravel the mysteries behind these enigmatic explosions. Visible-light observations will help astronomers identify the nature of the thousands of new gamma-ray sources that GLAST is expected to find.

"The GLAST observations will be so new that we’re expecting a lot of surprises," says Ritz. "Having detailed images in the kind of light we see with our eyes is bound to pay off, because the gamma-ray sky looks so different." 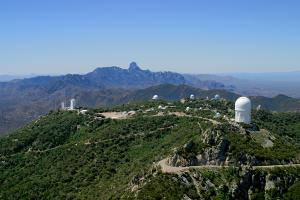 Image right: This aerial view is looking to the southwest across the panorama of Kitt Peak National Observatory in Arizona, stretching from the Synoptic Optical Long-term Investigations of the Sun (SOLIS) tower on the far left to the Mayall 4-meter telescope on the far right, with the modern Calypso active optics telescope visible on the ridge in the background, just to the right of the 4-meter building. Click image to enlarge. Credit: NOAO/AURA/NSF

NASA’s GLAST mission is an astrophysics and particle physics partnership, developed in collaboration with the U.S. Department of Energy, along with important contributions from academic institutions and partners in France, Germany, Italy, Japan, Sweden, and the U.S.

The National Optical Astronomy Observatory is operated by the Association of Universities for Research in Astronomy Inc. (AURA), under a cooperative agreement with the National Science Foundation.