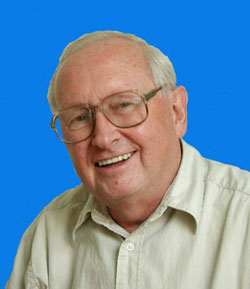 Hasso Niemann, who recently retired from NASA Goddard Space Flight Center in Greenbelt, Md., will receive the Al Seiff Memorial Award on June 25, 2007, during a technical meeting in France. The award honors researchers for outstanding contributions to the understanding of atmospheres of planets or moons through the use of high-speed probes that enter those atmospheres.

"Niemann devoted his career to the development of mass spectrometer technology and harnessing its capabilities to measure the composition of unknown planetary atmospheres," said Jim Arnold, who retired from NASA Ames Research Center in California's Silicon Valley as chief of the Space Technology Division. Mass spectrometry is a method that scientists use to reliably identify ionized molecules by measuring their mass. Arnold - now a scientist with the University of California, Santa Cruz -- nominated Niemann for the award.

"Atmosphere entry probes present a unique opportunity for performing qualitative analysis of extraterrestrial atmospheres in cases where remote sensing alone may not be sufficient and measurements with balloons or aircraft (are) not practical," Niemann and others observed during a technical presentation. 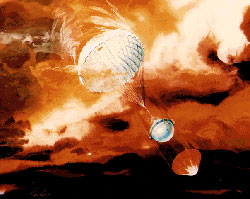 Al Seiff, for whom the award is named, spent most of his career at NASA Ames and was a colleague of Niemann's. Niemann, the first recipient of the award, began collaboration with Seiff on the 1971 Planetary Atmospheric Experiments Test (PAET), which demonstrated a probe could return accurate data about Earth's atmosphere. Years later, Seiff served as the principal investigator for the atmospheric structure investigation of the Jupiter Galileo entry probe that analyzed the structure of the huge planet's atmosphere.

The spectrometer made the first direct measurements of the Jovian atmosphere. The instrument measured methane and traces of other organic molecules, ammonia, water vapor, hydrogen sulfide, phosphine and rare gases. Scientists also found that Jupiter's atmosphere was drier at the probe entry site than they thought it would be.

Niemann was the principal investigator for the gas chromatograph mass spectrometer that rode the Huygens Probe, which entered Titan's atmosphere Jan. 14, 2005. The Huygens probe, released from the Cassini spacecraft, made the first direct measurements of Titan's surface and lower atmosphere. Readings confirmed that the moon's atmosphere is mostly made of nitrogen and methane, and found the surface was likely rich in hydrocarbons.

Niemann will receive the award during the fifth International Planetary Probe Workshop, scheduled to take place June 23 - 29, 2007 in Bordeaux, France. Niemann also will deliver the keynote address at the workshop.