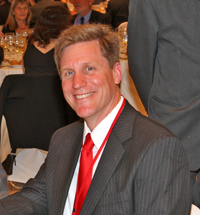 The 1987 Montreal Protocol established three panels to periodically provide updates on matters related to the ozone layer. As co-chair of the Scientific Assessment Panel, Newman is specifically charged with providing assessments of the science related to the ozone layer, ozone-depleting substances, climate and ozone interactions, and ultraviolet radiation at the Earth's surface.

“I’m really honored by my selection,” said Newman. “First, it’s still a very important task as ozone begins to show the first signs of recovery, and second, because my colleagues have entrusted me with the continuations of this work.”

Newman’s background and experience has more than prepared and him for this prestigious position. He graduated from Seattle University with a bachelor of science in physics and a minor in mathematics. He completed his doctorate in physics at Iowa State University.

For 17 years Newman has been with NASA, where his principal area of research has been stratospheric dynamics and chemistry. Newman has participated in and led more than 15 NASA aircraft field campaigns, including trips to Costa Rica, Sweden, Norway, and Alaska. During the SAGE III Ozone Loss and Validation Experiment (SOLVE) in 2000, Newman directed the first flight of the NASA ER-2, a civilian version of the U-2 spy plane, over Russia since the famous shoot-down of Gary Powers in May 1960 at the height of the Cold War.

Newman has also spent time researching the Antarctic ozone hole during his career with NASA. In the summer of 2006, he published a new prediction of the recovery of the Antarctica ozone hole.