Goddard Instrument Makes Cover of Science
Goddard's LEISA instrument has become a first-rate photographer, contributing to this spectacular photo of Jupiter, which appeared on the cover of the October 12 issue of the journal Science. It is a montage of Jupiter and its volcanic moon Io, taken by the New Horizons spacecraft as it sped past Jupiter on its way to Pluto. 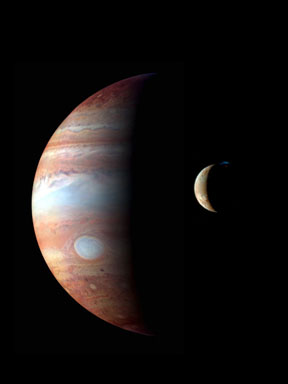 The Linear Etalon Imaging Spectral Array (LEISA) instrument on New Horizons was used to make the Jupiter image, taken February 28th 2007. It's a false-color composite of infrared light emitted by the giant planet's atmosphere. The wavelengths used (red: 1.59 µm, green: 1.94 µm, blue: 1.85 µm) highlight variations in the altitude of the Jovian cloud tops, with blue denoting high-altitude clouds and hazes above 300 millibar pressure level, and red indicating clouds as deep as several bars. (Since Jupiter has no solid surface, pressure is used to indicate altitude; for comparison, the typical pressure of Earth's atmosphere at sea level is about one bar.) The prominent bluish-white oval is the Great Red Spot.

LEISA is a component of the Ralph instrument suite on New Horizons. Ralph is a visible-light-and-infrared imager and spectrometer. It will provide color, composition, and thermal maps of Pluto and its moons. According to Goddard's Dr. Dennis Reuter, Project Scientist for Ralph, LEISA observed clouds of ammonia welling up from Jupiter's lower atmosphere; measured the infrared glow from at least 36 Io volcanoes, and measured lava temperatures up to 1,900 degrees Fahrenheit (1300 K); and differentiated between fresh and processed water ice on Jupiter's giant moon Ganymede.

These observations were featured in the October 12 issue of Science. In addition, the Multi-spectral Visible Imaging Camera (MVIC) instrument is another component of Ralph, and Goddard analysis of MVIC data produced the most detailed size and the first speed measurements yet of “waves” that run the width of the planet and indicate violent storm activity below, according to Reuter.

The Io image, taken on March 1st 2007, is an approximately true-color composite taken by the panchromatic Long-Range Reconnaissance Imager (LORRI), with color information provided by the 0.5 µm (“blue”) and 0.9 µm (“methane”) channels of the MVIC. The image shows a major eruption in progress on Io’s night side, at the northern volcano Tvashtar. Incandescent lava glows red beneath a 330-km (205-mile) high volcanic plume, whose uppermost portions are illuminated by sunlight. The plume appears blue due to Rayleigh scattering by small particles.

Print-resolution copy
› Back To Top