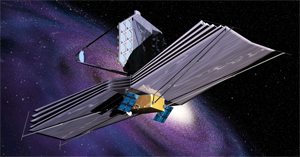 Image right: The James Webb Space Telescope (JWST) will be almost three times the size of Hubble. JWST has been designed to work best at infrared wavelengths. This will allow it to study the very distant universe, looking for the first stars and galaxies that ever emerged. NASA, ESA, and the Canadian Space Agency are partners on this mission. Click image to view animation of how the Webb Telescope will be deployed once in orbit. Image Credit: ESA. Animation Credit: NASA.

The telescope is a mission of international cooperation between NASA, ESA and the Canadian Space Agency to investigate the origin and evolution of galaxies, stars and planetary systems.

At the heart of the observatory is a large telescope, which has a primary mirror measuring 21.3 feet in diameter (compared to 7.9 feet for Hubble) that provides a relatively large field of view.

A set of four sophisticated instruments, including a fine guidance sensor for precision pointing, will combine superb imaging capability at visible and infrared wavelengths with various spectroscopic modes to learn about the chemistry and evolution of objects in our universe.

The telescope will operate well outside the Earth's atmosphere at a spot in space called the second Lagrangian point or "L2" located 1 million miles -- or four times farther than the moon's orbit -- in the direction opposite the sun. From this location, the observatory is expected to revolutionize our view of the cosmos as Hubble has.

According to the agreement, NASA is responsible for the overall management and operation of the JWST mission and will build the spacecraft, the telescope and the platform that will house the instruments. ESA will provide an Ariane 5 ECA rocket for the telescope's launch.

NASA also will provide the microshutters, which are used to select which star in the field of view will be observed by the detectors.

The third instrument on board is the Mid-Infrared Instrument. It is being built through a consortium of nationally funded European institutions, which are responsible for the instrument's optical assembly and NASA, with coordination through ESA. Canada will provide the fourth instrument on board, the Fine Guidance Sensor/Tuneable Filter Imager.

"The signing of this agreement on JWST, based on a long-standing and consolidated cooperation between ESA and NASA, will make history once more," said Dordain. "In particular, we are very proud to use Ariane 5 to put this great observatory into space."

At today's ceremony, the leaders of both agencies also signed an official agreement on the ESA-initiated Laser Interferometer Space Antenna (LISA) Pathfinder mission, currently targeted for launch in early 2010. LISA Pathfinder is aimed at demonstrating the technologies needed for a planned future joint ESA-NASA LISA mission that will detect gravitational waves in space and test the theory of general relativity. 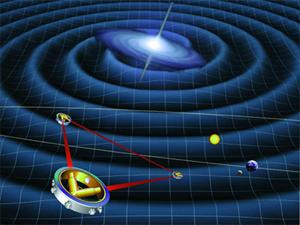 Image left: The Laser Interferometer Space Antenna consists of three spacecraft orbiting the sun in a triangular configuration, separated from each other by five million kilometers. Each spacecraft will contain freely falling "proof masses" protected from all other forces except for gravity. The relative motion of the masses can be measured by combining laser beams shining between the spacecraft. Passing gravitational waves will ripple space and time, revealing their presence by altering the motion of the proof masses. Click image to view animation of LISA directly detecting the "tremors of space." Image Credit: NASA. Animation Credit: NASA/JPL.

Under this agreement, ESA will design, develop, launch and operate the LISA Pathfinder spacecraft. A consortium of European scientific institutes will provide the LISA Technology Package, which features a sensor to detect non-gravitational forces on the spacecraft.

NASA will provide the Disturbance Reduction System Package. That package will work in tandem with the technology package and consists of thrusters that produce a minute level of force, combined with control systems and software.