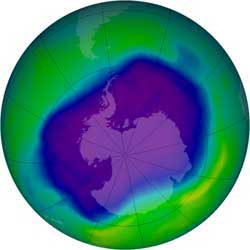 NASA scientists will join researchers from around the world to celebrate the 20th anniversary of the Montreal Protocol, an international treaty designed to reduce the hole in Earth's protective ozone layer. The United Nations Environment Programme will host the meeting from Sept. 23 to 26 in Athens, Greece. NASA scientists study climate change and research the timing of the recovery of the ozone layer.

Image right: The Antarctic ozone hole on Sept. 24, 2006, depicted in blue and purple, was equal in size to the largest single-day area of 11.4 million square miles on record, previously reached on Sept. 9, 2000. The levels of ozone depleting compounds in the atmosphere continue to drop, thanks to 20 years of scientific advances following the signing of the Montreal Protocol. Credit: NASA

"The Montreal Protocol has been a resounding success," said Richard Stolarski, a speaker at the symposium from NASA's Goddard Space Flight Center, Greenbelt, Md. "The effect can be seen in the leveling off of chlorine compounds in the atmosphere and the beginning of their decline."

Since the Montreal Protocol was signed on Sept. 16, 1987, more than 100 nations have agreed to limit the production and release of compounds, notably human-produced chlorofluorocarbons, known as CFCs. CFCs and a list of other compounds are known to degrade the layer of ozone in the stratosphere that shields life from the sun's ultraviolet radiation. That process gives rise to the ozone hole above Antarctica.

Today, space-based instruments aboard NASA's Aura satellite monitor the chemical make-up of the atmosphere and collect data that will help researchers better understand ozone chemistry through computer models. While the data show that average chlorine levels are beginning to decline, springtime ozone depletion in the polar regions continues to be a prominent atmospheric feature. 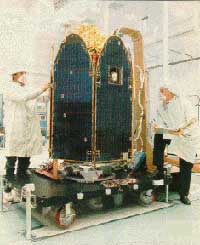 Image left: Preparations are made to the final mapping instrument, which launched in 1996 and was decommissioned in May 2007. Thirty years of the Total Ozone Mapping Spectrometer (TOMS) program afforded researchers with tools to assess the size of Earth's ozone hole. Credit: NASA

"The goal now is to ensure that CFCs and other emissions continue to fall to below the levels that produce an ozone hole," said Goddard's Anne Douglass, the deputy project scientist for Aura. "This won't happen until about 2070."

NASA and National Oceanic and Atmospheric Administration scientists announced in 2006 that the hole was the largest ever observed, at 10.6 million square miles. The size of the hole will approach its annual peak in late September. Scientists at the symposium will discuss 20 years of scientific progress, as well as how best to monitor the atmosphere to ensure the goals of the treaty are realized.

In addition to the current satellite measurements, NASA research efforts use data collected on the ground, in the air and from previous missions.

Data from past satellite observations have been essential to understanding ozone depletion. NASA's Total Ozone Mapping Spectrometer, or TOMS, was one of NASA's signature ozone research achievements. TOMS launched in 1978 and was decommissioned in May 2007.

"The TOMS images of the Antarctic ozone hole caused worldwide alarm and thus played a key role in the Montreal Protocol and other international agreements to phase out the offending chemicals from our environment," said Goddard's Pawan Bhartia, project scientist for the mission. In addition, measurements from the Stratospheric Aerosol and Gas Experiment, along with the Microwave Limb Sounder and the Halogen Occultation Experiment aboard the Upper Atmospheric Research Satellite, were important to scientists' understanding of ozone.

Scientists collect atmospheric composition data from ground-based monitoring stations around the world. Researchers have collected measurements since 1978 for nearly all compounds identified in the Montreal Protocol. The data come from coastal monitoring stations used in previous missions and as part of the NASA-sponsored Advanced Global Atmospheric Gases Experiment.

Airborne instruments have been a critical piece of the scientific search to find the cause of ozone depletion, and they remain central to NASA's research efforts today.

Data from NASA's Airborne Antarctic Ozone Experiment in 1987 "provided the smoking gun measurements that nailed down the cause of the ozone hole being the increase of CFCs combined with the unique meteorology of the Antarctic," Stolarski said. Since then, NASA has sponsored several airborne field campaigns that have furthered understanding of the chemical processes controlling ozone.

These measurements are key for researchers working to predict the future of the global ozone layer. The differences between loss and recovery of ozone at the poles and in non-polar regions are complex. "Such complexity has led to heated debates over the timing and extent of recovery," said Ross Salawitch, an atmospheric chemist at the Jet Propulsion Laboratory, Pasadena, Calif.

The modern focus in ozone research also has shifted to include the effects of climate change. "Twenty years ago we went out of our way to separate ozone depletion from climate change," Salawitch said. "After a decade of looking at data, the community realizes they are linked in subtle but profoundly important ways."