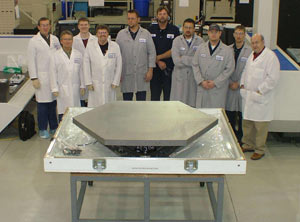 Image right: The JWST telescope is composed of 18 hexagonal-shaped segments. Here, the manufacturing group gathers around one of the 18 segments ready to be shipped from Axsys Technologies which manufactured the mirror blanks. Credit: Axsys

A telescope’s sensitivity, or how much detail it can see, is directly related to the size of the mirror area that collects light from the cosmos. A larger area collects more light to see deeper into space, just like a larger bucket collects more water in a rain shower than a small one. The larger mirror also means the James Webb Space Telescope (JWST) will have excellent resolution. That's why the telescope's mirror is made up of 18 mirror segments that form a total area of 25 square-meters (almost 30 square yards) when they all come together.

The challenge was to make the mirrors lightweight for launch, but nearly distortion-free for excellent image quality. That challenge has been met by AXSYS Technologies., Inc., Cullman, Ala. "From the start, AXSYS Technologies has been a key player in the mirror technology development effort," said Kevin Russell, mirror development lead at NASA's Marshall Spaceflight Center, Huntsville, Ala.

If the mirror were assembled completely and fully opened on the ground, there would be no way to fit it into a rocket. Therefore, the Webb Telescope's 18 mirror segments must be set into place when the telescope is in space. Engineers solved this problem by allowing the segmented mirror to fold, like the leaves of a drop-leaf table. 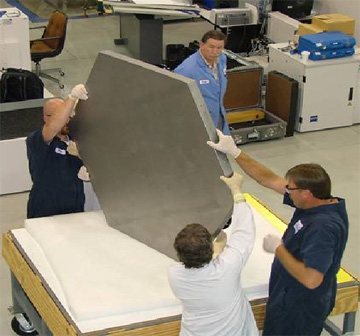 Each of the 18 mirrors will have the ability to be moved individually, so that they can be aligned together to act as a single large mirror. Scientists and engineers can also correct for any imperfections after the telescope opens in space, or if any changes occur in the mirror during the life of the mission. Each segment is made of beryllium, one of the lightest of all metals known to man. Beryllium has been used in other space telescopes and has worked well at the super-frigid temperatures of space in which the telescope will operate.

Each of the hexagonal-shaped mirror segments is 1.3 meters (4.26 feet) in diameter, and weighs approximately 20 kilograms or 46 pounds. The completed primary mirror will be over 2.5 times larger than the diameter of the Hubble Space Telescope's primary mirror, which is 2.4 meters in diameter, but will weigh roughly half as much.

"The James Webb Space Telescope will collect light approximately 9 times faster than the Hubble Space Telescope when one takes into account the details of the relative mirror sizes, shapes, and features in each design," said Eric Smith, JWST program scientist at NASA Headquarters, Washington. The increased sensitivity will allow scientists to see back to when the first galaxies formed just after the Big Bang. The larger telescope will have advantages for all aspects of astronomy and will revolutionize studies of how stars and planetary systems form and evolve. 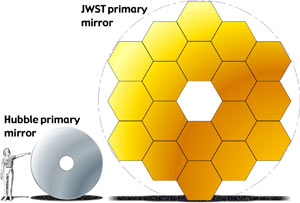 Image right: JWST will have a 6.6 meter (21.65 feet) diameter primary mirror, which would give it a significant larger collecting area than the mirrors available on the current generation of space telescopes. Hubble Space Telescope's mirror is a much smaller 2.4 meters (7.8 feet) in diameter. Click on image to enlarge. Credit: NASA

The 18 mirrors have now been shipped to L-3 Communications SSG-Tinsley, Richmond, Calif. where they can be ground and polished.

After the grinding and polishing, the mirror segments will be delivered to Ball Aerospace in small groups where they will be assembled. Once the mirrors are completed, they will go to NASA's Goddard Space Flight Center, Greenbelt, Md., for final assembly on the telescope.

Upon successful launch in 2013, JWST will study the first stars and galaxies following the Big Bang.