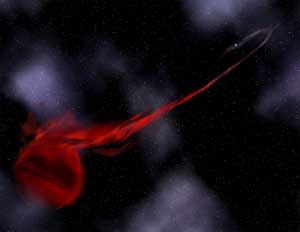 Image right: In this artist depiction of the SWIFT J1756.9-2508 system, the foreground object is the planet-mass object. The pulsar, located at the upper right, is tidally distorting the companion into a teardrop-shaped object, and ripping gas from it. This material flows in a stream toward the pulsar and forms a disk around it. Eventually, enough gas builds up in the disk to produce an outburst bright enough to make the system visible from Earth. Click on image to enlarge. Credit: Aurore Simonnet/Sonoma State University

The object’s minimum mass is only about 7 times the mass of Jupiter. But instead of orbiting a normal star, this low-mass body orbits a rapidly spinning pulsar. It orbits the pulsar every 54.7 minutes at an average distance of only about 230,000 miles (slightly less than the Earth-Moon distance).

"This object is merely the skeleton of a star," says co-discoverer Craig Markwardt of NASA’s Goddard Space Flight Center in Greenbelt, Md. "The pulsar has eaten away the star’s outer envelope, and all the remains is its helium-rich core."

Hans Krimm of NASA Goddard discovered the system on June 7, when Swift’s Burst Alert Telescope picked up an outburst of X rays and gamma rays in the direction of the galactic center. The source was named SWIFT J1756.9-2508 for its sky coordinates in the constellation Sagittarius.

RXTE began observing SWIFT J1756.9 on June 13 with its Proportional Counter Array (PCA). After analyzing the PCA data, Markwardt realized that the object was pulsing in X rays 182.07 times per second, which told him that it was a rapidly spinning pulsar. These so-called millisecond pulsars are neutron stars that spin hundreds of times per second, faster than a kitchen blender. Normally, the spin rate of neutron stars slows down as they age, but much like we can pull a string to “spin up” a top, gas spiraling onto a neutron star from its companion can maintain or even increase its fast spin. 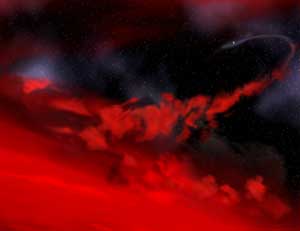 Image left: The low-mass companion in SWIFT J1756.9-2508 may have a mass just a few times greater than Jupiter, but up close, it would probably look nothing like a planet. The object is probably dominated by helium gas. Even though it is much larger than the pulsar, the pulsar is at least 100 times more massive. Click on image to enlarge. Credit: Aurore Simonnet/Sonoma State University

In the case of SWIFT J1756.9-2508, Markwardt detected subtle modulations in the X-ray timing data that revealed a low-mass companion tugging the pulsar toward and away from Earth. His calculations show that the companion has a minimum mass about 7 times that of Jupiter. Because we don’t know the orbital inclination of the system, the companion’s actual mass is unknown, but it is extremely unlikely to exceed 30 Jupiters.

MIT astronomers led by Deepto Chakrabarty also observed the system with RXTE, before it faded to invisibility on June 21. Chakrabarty’s group reached identical conclusions, and the two teams have coauthored a paper that has been accepted for publication in the Astrophysical Journal Letters.

The system is only the eighth millisecond pulsar that is observed to be accreting mass from a companion. Only one other such system has a pulsar companion with such a low mass. The companion in this system, XTE J1807-294, also has a minimum mass of about 7 Jupiters. "Given that we don’t know the exact mass of either companion, ours could be the smallest," says Krimm.

The system probably formed several billion years ago, when it consisted of a very massive star and a smaller star with perhaps 1 to 3 solar masses. The more massive star evolved quickly and exploded as a supernova, leaving behind the neutron star. The smaller star eventually started to puff up en route to becoming a red giant, and the two objects became embedded in the extended stellar envelope. This drained orbital energy, causing the two stars to draw ever nearer, while simultaneously ejecting the envelope.

Today, the two objects are so close to each other than the neutron star’s powerful gravity produces a tidal bulge on its companion, siphoning off gas that flows into a disk that surrounds the neutron star. The flow eventually becomes unstable and dumps large quantities of gas onto the neutron star, causing an outburst like the one observed in June. 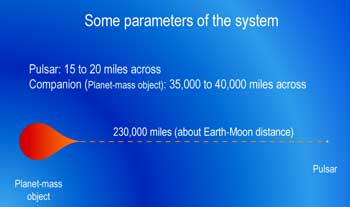 Image right: The orbital separation of the two members in SWIFT J1756.9-2508 is remarkably similar to the Earth-Moon distance, but the bodies themselves are totally different in their physical nature. Credit: Aurore Simonnet/Sonoma State University

Evolution models by Christopher Deloye of Northwestern University suggest that the low-mass companion is helium dominated. "Despite its extremely low mass, the companion isn’t considered a planet because of its formation," says Deloye. "It’s essentially a white dwarf that has been whittled down to a planetary mass."

After billions of years, little remains of the companion star, and it remains unclear whether it will survive. "It’s been taking a beating, but that’s part of nature," adds Krimm.

With an estimated distance of roughly 25,000 light-years, the system is normally too faint to be detected at any wavelength, and is only visible during an outburst. SWIFT J1756.9 has never been seen to erupt until this June, so as Markwardt points out, "We don't know how long it will slumber before it wakes up again."