Hawaii Reveals Steamy Martian Underground
Is Mars dead, or is it only sleeping?

The surface of Mars is completely hostile to life as we know it. Martian deserts are blasted by radiation from the sun and space. The air is so thin, cold, and dry, if liquid water were present on the surface, it would freeze and boil at the same time. But there is evidence, like vast, dried up riverbeds, that Mars once was a warm and wet world that could have supported life. Are the best times over, at least for life, on Mars?

New research raises the possibility that Mars could awaken from within -- three large Martian volcanoes may only be dormant, not extinct. Volcanic eruptions release lots of greenhouse gasses, like carbon dioxide, into the atmosphere. If the eruptions are not complete, and future eruptions are large enough, they could warm the Martian climate from its present extremely cold and dry state. 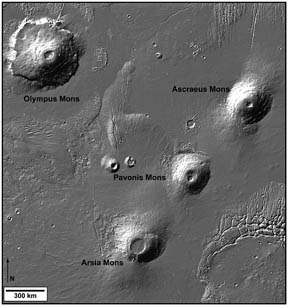 NASA-funded researchers traced the flow of molten rock (magma) beneath the three large Martian volcanoes by comparing their surface features to those found on Hawaiian volcanoes.

"On Earth, the Hawaiian islands were built from volcanoes that erupted as the Earth's crust slid over a hot spot -- a plume of rising magma," said Dr. Jacob Bleacher of Arizona State University and NASA's Goddard Space Flight Center in Greenbelt, Md. "Our research raises the possibility that the opposite happens on Mars - a plume might move beneath stationary crust." The observations could also indicate that the three Martian volcanoes might not be extinct. Bleacher is lead author of a paper on these results that appeared in the Journal of Geophysical Research, Planets, September 19.

The three volcanoes are in the Tharsis region of Mars. They are huge compared to terrestrial volcanoes, with each about 300 kilometers (186 miles) across. They form a chain heading northeast called the Tharsis Montes, from Arsia Mons just south of the Martian equator, to Pavonis Mons at the equator, to Ascraeus Mons slightly more then ten degrees north of the equator. 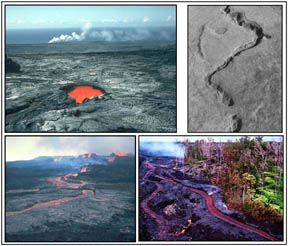 No volcanic activity has been observed at the Tharsis Montes, but the scarcity of large impact craters in the region indicates that they erupted relatively recently in Martian history. Features in lava flows around the Tharsis Montes reveal that later eruptions from large cracks, or rift zones, on the sides of these volcanoes might have started at Arsia Mons and moved northeast up the chain, according to the new research.

The researchers first studied lava flow features that are related to the eruptive history of Hawaiian volcanoes. On Hawaii (the Big Island), the youngest volcanoes are on the southeastern end, directly over the hot spot. As the Pacific crustal plate slowly moves to the northwest, the volcanoes are carried away from the hotspot. Over time, the movement has created a chain of islands made from extinct volcanoes.

Volcanoes over the hot spot have the hottest lava. Its high temperature allows it to flow freely. A steady supply of magma from the hot spot means the eruptions last longer. Lengthy eruptions form lava tubes as the surface of the lava flow cools and crusts over, while lava continues to flow beneath. After the eruption, the tube empties and the surface collapses, revealing the hidden tube.

As the volcano is carried away from the hot spot, magma has to travel farther to reach it, and the magma cools. Cooler magma makes the lava flow more slowly compared to lava at the younger volcanoes, like the way molasses flows more slowly than water. The supply of magma is not as steady, and the eruptions are shorter. Brief eruptions of slowly flowing lava form channels instead of tubes. Flows with channels partially or completely cover the earlier flows with tubes. 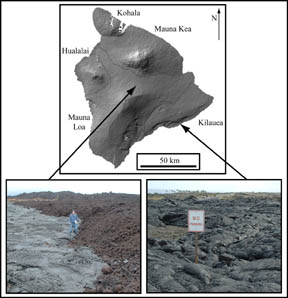 As the volcano moves even further from the hot spot, only isolated pockets of rising magma remain. As the magma cools, it releases trapped gas. This creates short, explosive eruptions of cinders (gas bubbles out of the lava, forming sponge-like cinder stones). Earlier flows become covered with piles of cinders, called cinder cones, which form around these eruptions.

"We thought we could take what we learned about lava flow features on Hawaiian volcanoes and apply it to Martian volcanoes to reveal their history," said Bleacher. "The problem was that until recently, there were no photos with sufficient detail over large surface areas to reveal these features on Martian volcanoes. We finally have pictures with enough detail from the latest missions to Mars, including NASA's Mars Odyssey and Mars Global Surveyor, and the European Space Agency's Mars Express missions."

Using images and data from these missions, the team discovered that the main flanks of the Tharsis Montes volcanoes were all alike, with lava channels covering the few visible lava tubes. However, each volcano experienced a later eruption that behaved differently. Lava issued from cracks (rifts) on the sides of the volcanoes, forming large lava aprons, called rift aprons by the team.

The new observations show that the rift apron on the northernmost volcano, Ascraeus Mons, has the most tubes, many of which are not buried by lava channels. Since tube flows are the first to form over a hot spot, this indicates that Ascraeus was likely active more recently. The flow on the southernmost volcano, Arsia Mons, has the least tubes, indicating that its rift aprons are older. Also, the team saw more channel flows partially burying tube flows at Arsia. These trends across the volcanic chain indicate that the rift aprons might have shared a common source like the Hawaiian volcanoes, and that apron eruptions started at Arsia, then moved northward, burying the earlier tube flows at Arsia with channel flows.

Image left: This figure shows two examples of younger lava channels that buried older lava tubes on Mars. The boundary between the rougher appearing lava channels and the smoother appearing lava tubes is outlined in black. Image A was taken by the High Resolution Stereo Camera (HRSC) onboard the European Space Agency's Mars Express and image B was taken by the Thermal Emission Imaging System (THEMIS) onboard NASA's Mars Odyssey spacecraft. Print-resolution copy Credit: ESA and NASA

Since there is no evidence for widespread crustal plate movement on Mars, one explanation is that the magma plume could have moved beneath the Tharsis Montes volcanoes, according to the team. This is opposite to the situation at Hawaii, where volcanoes move over a plume that is either stationary or moving much more slowly. Another scenario that could explain the features is a stationary plume that spreads out as it nears the surface, like smoke hitting a ceiling. The plume could have remained under Arsia and spread northward toward Ascraeus. "Our evidence doesn't favor either scenario, but one way to explain the trends we see is for a plume to move under the stationary Martian crust," said Bleacher.

The team also did not see any cinder cone features on any of the Tharsis Montes rift apron flows. Since cinder cone eruptions are the final stage of hot spot volcanoes, the rift apron eruptions might only be dormant, not extinct, according to the team. If the eruptions are not complete, and future eruptions are large enough, they could contribute significant amounts of water and carbon dioxide to the Martian atmosphere.

Image right: This figure shows two examples of volcanic cones. Image A was taken by the High Resolution Imaging Science Experiment (HiRISE) Onboard NASA’s Mars Reconnaissance Orbiter. This image shows a cone on the southern main flank of Pavonis Mons. Image B is taken from Google Maps, and shows SP crater in northern Arizona, near the town of Flagstaff. Print-resolution copy Credit: NASA and Google, Inc.