Goddard Lunar Science on a Roll
Pack your bags because Goddard's "suitcase science" is taking off. Coming on the heels of two Lunar Sortie Science Opportunities (LSSO) awards for Goddard are two more, this time in the field of astrophysics. As before, the awards are funded by NASA Headquarters for studies that could result in simple, automated "suitcase science" instrument packages deployed on the lunar surface by astronauts. 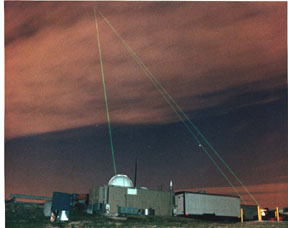 The first proposal, "Precision Lunar Laser Ranging", is being led by Goddard astrophysicist Dr. Stephen Merkowitz. The proposal could lead to suitcase-sized laser reflector arrays and/or laser transponders at various locations on the moon so the distance from Earth to the moon can be determined to the submillimeter level. The laser transponders also could be eventually deployed on Mars for the same purpose.

Over the past 35 years, laser ranging to retroreflector arrays placed on the lunar surface have dramatically increased mankind's understanding of gravitational physics along with Earth and Moon geophysics, geodesy, and dynamics. "Significant advances in these areas will require placing modern retroreflectors and/or active laser ranging systems at new locations on the lunar surface," Merkowitz said.

Retroreflectors are extremely robust, do not require power, and will last for years. This longevity is important for studying long-term effects such as a possible time variation of the gravitational constant. However, to make a large leap in lunar ranging accuracy and to precision range to planets such as Mars, an active laser ranging system will be required. Over the next year, Merkowitz and his colleagues will perform a concept study for a lunar ranging flight experiment that will enable unprecedented tests of Einstein's theory of General Relativity in addition to providing valuable data on the interior structure of the Moon and Earth-Moon interactions. 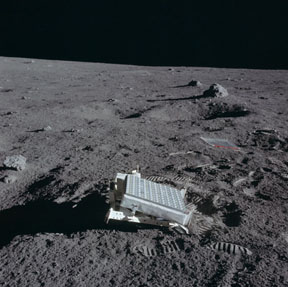 Image left: Retroreflector arrays were deployed on the lunar surface by the Apollo 11, 14, and 15 astronauts, and are still being used today for lunar ranging. The advantage of deploying modern retroreflectors at new lunar sites will be studied under the LSSO award. Credit: NASA Print-resolution copy

The second proposal is for a Lunar X-ray Observatory (LXO), and it began with the mysterious case of the glowing comet. In 1996, a team of scientists including Goddard's Dr. Casey Lisse (now at Johns Hopkins University) and Dr. Michael Mumma observed comet Hyakutake with the ROSAT satellite. They were surprised to see it glowing in soft (low-energy) X-rays. This was unexpected because X-rays are usually given off by hot things in the universe, and comets, being a lump of ice and dust, are cold.

It was actually the breath of the sun causing the glow, according to Dr. Thomas Cravens of the University of Kansas, Lawrence, a member of the LXO team. The sun continually blows a thin gas of electrically charged particles (plasma) into space in all directions. This is called the solar wind. Cravens knew that the solar wind contains atoms with a lot of positive electric charge (oxygen and iron ions). Since opposite electric charges attract, he reasoned that these positive solar wind ions would steal negatively charged electrons from electrically neutral atoms emitted by the comet as its surface vaporized. The ion with the stolen electron would initially be highly energetic, but as it relaxed to a less energetic state, it would get rid of the extra energy by emitting a soft X-ray. This phenomenon, dubbed Solar Wind Charge Exchange, or SWCX, was responsible for the mysterious X-ray glow around the comet.

"The LXO team realized that since the solar wind blows through the solar system, we should see X-rays from SWCX throughout the solar system," said Goddard's Dr. Michael Collier, Principal Investigator for LXO. "Particularly exciting is the ability to see the boundary of the vast region of space around Earth that's dominated by our planet's magnetic field, called the magnetosphere."

Interaction between the solar wind and the boundary of the magnetosphere causes space weather effects that can disrupt satellites, radio communication, and power systems. "This boundary is not visible in the ordinary light seen by our eyes, so typically spacecraft have to travel through it to get measurements. But this area is huge, extending past the moon's orbit on Earth's night side, and spacecraft exploring the magnetosphere only give us information about a single tiny point. However, by observing the soft X-rays emitted from near the magnetosphere by SWCX, we can see the big picture – a global view. An observatory on the moon provides a terrific vantage point." 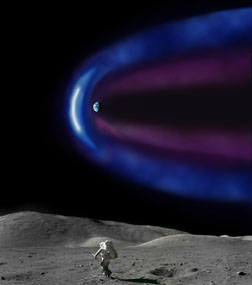 Image right: This is an artist's concept of the magnetosphere's boundary as seen from the moon in soft X-rays emitted by solar wind charge exchange (SWCX). Credit: NASA / Rob Kilgore Print-resolution copy

The team will be able to string X-ray images from the LXO together to make movies that show how the boundary between the magnetosphere and the solar wind reacts to changes in the solar wind. "Energy transport across this boundary, called the magnetopause, is responsible for the disruptive space weather phenomena. The ability to see this happen on a global scale is key to a better understanding of space weather," said Collier.

The team will also use LXO to improve astrophysics observations. Astrophysicists are trying to determine the nature and extent of the Local Hot Bubble, a region around our solar system and nearby stars where the interstellar gas is unusually thin. (One theory is that it was cleared by a shock wave from an exploding star.) However, soft X-rays from SWCX in our solar system interfere with observations of soft X-rays emitted by the bubble. Astronomers have a hard time determining if the soft X-ray came from our own solar system, or from the distant regions of the bubble. "Our observations with LXO will help improve understanding of SWCX and allow astrophysicists to correct for its interference," said Collier. 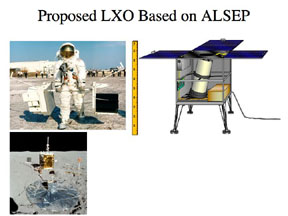 Image left: The right panel is a drawing of one potential configuration for a Lunar X-ray Observatory. The design will be based on the Apollo Lunar Surface Experiments Package (two left panels). Credit: NASA

This electrically charged dust could stick to spacesuits and machinery. Since the moon has almost no atmosphere, countless tiny meteorites have hit the lunar surface over billions of years, forming dust that is jagged and sharp. If this dust becomes embedded in spacesuits and machinery, it could cause them to fail over time. "By observing how much the solar wind contributes to surface charging, we can estimate how significant the dust hazard will be to explorers," said Collier.

"The LXO has many applications, from plasma physics to astronomy to lunar and planetary exploration. It takes a very rare organization like Goddard, with experts in all these areas, to successfully undertake such a project," said Collier.