Suitcase Science on the Moon
In October 1963, two cartographers with the Air Force Aeronautical Chart and Information Center saw a strange glow on the moon. Using the 24-inch refractor telescope at Lowell observatory in Flagstaff, Arizona, James Greenacre and Edward Barr saw a deep, ruby-red glow coming from the crater Aristarchus. The sighting might have been glowing gas from volcanic activity, and a second sighting in November of that year was verified by Dr. John Hall, Director of the observatory at the time. 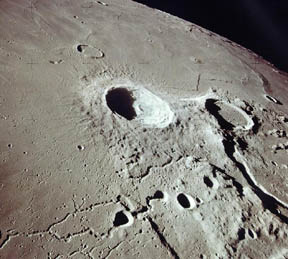 Image right: This is a view of the Aristarchus and Herodotus craters taken from orbit during the Apollo 15 mission. The view is toward the south. Aristarchus crater is near the center of the image, and the flooded Herodotus is to the right. Credit: NASA

Throughout history, there have been many more. There have been rumbles from other areas on the moon as well. For example, when Dr. Yosio Nakamura of the University of Texas, Austin, and his colleagues reviewed seismology data from the Apollo missions, they discovered there was a magnitude 5.7 moonquake near the lunar south pole, a possible site for a future lunar base.

The moon is not dead yet, nor has it revealed all its secrets. Scientists don't even agree how it got here in the first place. As part of NASA's vision for space exploration, astronauts will return to the moon by 2020. They plan to test new technology for human missions to more remote destinations, like Mars. However, there are still many discoveries to be made about the moon itself, and lunar exploration is an important part of the plans.

As part of an effort to develop new opportunities to conduct important science investigations during the planned renewal of human exploration of the moon, NASA chose seven proposals from more than 70 submissions under the Lunar Sortie Science Opportunities (LSSO) Program.

The seven selected proposals will result in advanced development for simple, automated instrument packages deployed on the lunar surface by astronauts. Such "suitcase science" packages could open up a wide variety of research applications regarding the moon and the lunar environment.

Two proposals from scientists at NASA's Goddard Space Flight Center in Greenbelt, Md., were chosen; one to study moonquakes, called "Seismology and Heat flow instrument package for Lunar Science and Hazards," and another to search for possible frozen water deposits at the lunar south pole, called "Volatile Analysis by Pyrolysis of Regolith (VAPoR) on the Moon using Mass Spectrometry".

Scientists are interested in establishing a lunar base at the south pole of the moon because the possibility that a vital resource – water in the form of ice – may exist there. The depths of some craters in the polar regions may be in permanent shadow because the moon is only very slightly tilted from its spin axis. These regions would be very cold, and able to trap water as ice for billions of years if somehow ice was transported there.

If water ice exists in the eternal shadows of the lunar poles, and it is practical to extract water from the lunar soil, the water could be used for drinking, or it could be broken down into hydrogen and oxygen for use as rocket fuel and breathable air.

Volatiles are things that vaporize easily, like frozen water, and a major part of the VAPoR volatile mission is to discover how much ice, if any, exists at the lunar poles. "Remote missions, like Lunar Prospector, have detected hints that ice may exist at the lunar poles, but the only way to know for sure is to go there and see how much is trapped in the lunar soil (regolith)," said Goddard's Dr. Daniel Glavin, Principal Investigator for the proposed mission.

The mission will use a small oven to vaporize volatiles in lunar soil. The resulting gasses will be analyzed with a mass spectrometer instrument, which uses electric fields to separate molecules by their mass. 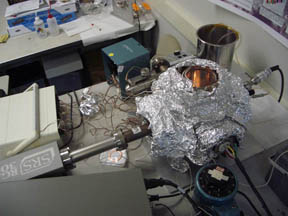 Image left: This is an image of the VAPoR prototype (laboratory breadboard). The pyrolysis heating element containing the lunar soil sample is on the right side, a vacuum chamber and ion gauge that monitors the internal pressure (filament seen glowing) in the middle, and the quadrupole mass spectrometer tube used to analyze the gases released from the lunar sample can be seen to the left. Credit: NASA

If the mission discovers water, it can also reveal its origin by analyzing isotopes, elements with similar chemical properties but different masses. For example, the isotope deuterium is chemically similar to its lighter cousin, hydrogen, a component of water. Deuterium is much less common than hydrogen. However, like hydrogen, deuterium can bond with oxygen to form water. By measuring the ratio of deuterium to hydrogen in water, scientists can tell where it came from. Water from a comet will have a higher deuterium to hydrogen ratio than solar wind implanted hydrogen or water derived from Earth contamination.

Part of the goal for the moonquake mission is to evaluate safety. "We're not sure it's a good idea to put your mobile home on the edge of Shackleton crater with all the moonquake activity," said Goddard's Bruce Milam, who is helping the team design the drill needed to bury the instruments. The mission will also measure heat flow from the moon, which will help gauge the potential for lunar volcanic activity. 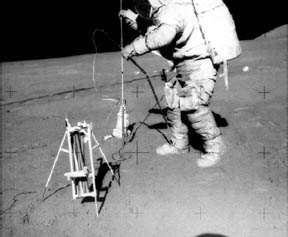 Image right: The Apollo Lunar Surface Drill was used to drill hollow tubes into the lunar surface. These tubes were used for emplacement of probes for the heat flow and neutron probe experiments, as well as to obtain deep core tubes of the regolith (lunar soil) for geology. Goddard's moonquake mission will employ a drill with a more modern design to bury the instruments. In this image, Apollo 15 astronaut David Scott threads a heat flow probe down the tube of a bore stem. Note the drill head in background and bore stem rack in foreground. Credit: NASA

"Many moonquakes are from meteorite impacts or tidal stress from Earth's gravity, but there are these other moonquakes that we can't explain," said Goddard's Dr. Patrick Taylor, Principal Investigator for the mission. "Our mission will help understand their cause by revealing the layers of the moon, its composition, and how it is cooling."

Both mission proposals were awarded a nine-month contract to refine their design and evaluate alternatives, like various locations and different drill designs for the moonquake mission, or robotic versus human deployment for the VAPoR mission (NASA is not sure how risky it is to send astronauts to the bottom of a deep lunar crater).

"The proposals we received show that the scientific community is excited about the opportunity to capitalize on the nation's planned lunar outpost. The moon has much to teach us about itself, the history of our solar system, and even the history of the sun. In the future, more and more scientists will be able to participate in lunar research as we focus attention on Earth's fascinating satellite," said Dr. Alan Stern, associate administrator for NASA's Science Mission Directorate.