Gamma-Ray Bursts Active Longer Than Thought
Using NASA’s Swift satellite, astronomers have discovered that energetic flares seen after gamma-ray bursts (GRBs) are not just hiccups, they appear to be a continuation of the burst itself. 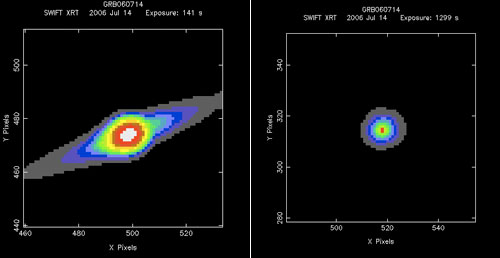 Image above: The X-ray Telescope on NASA's Swift satellite captured the intensity of a bright X-flare from GRB 060714. The elongated blue and gray regions are an artifact of the image processing (left). After the flare, (right) the GRB's X-ray emission faded considerably, revealing a faint afterglow. Click image to enlarge. Credit: NASA / Swift / XRT Science Team.

GRBs release in seconds the same amount of energy our Sun will emit over its expected 10 billion-year lifetime. The staggering energy of a long-duration GRB (lasting more than a few seconds) comes from the core of a massive star collapsing to form a black hole or neutron star. In current theory, inrushing gas forms a disk around the central object. Magnetic fields channel some of that material into two jets moving at near-light speed. Collisions between shells of ejected material within the jet trigger the actual GRB.

Early in the mission, Swift’s X-ray Telescope (XRT) discovered that the initial pulse of gamma-rays, known as prompt emission, is often followed minutes to hours later by short-lived but powerful X-ray flares. The flares suggested — but did not prove — that GRB central engines remain active long after the prompt emission. 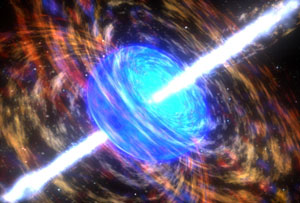 Image right: This artwork depicts the central engine of a gamma-ray burst. A powerful jet of radiation and fast-moving particles blasts its way out of the central region of a dying star. The jet is presumably powered by material spiraling into a black hole or neutron star. Multiple episodes of infall provides fuel for the engine, leading to the burst and later X-ray flares. Credit: NASA / SkyWorks Digital.

After analyzing GRB 060714, named for its detection date of July 14, 2006, Hans Krimm of Universities Space Research Association, Columbia, Md. and NASA’s Goddard Space Flight Center in Greenbelt, Md., and eight colleagues, have demonstrated that X-ray flares are indeed a continuation of the prompt emission, showing that GRB central engines are active much longer than previously thought.

Swift’s Burst Alert Telescope (BAT) picked up the initial GRB in the constellation Libra. Then, from about 70 to 200 seconds after the initial burst, the BAT and XRT registered five flares. Each flare exhibited rapid and large-scale variability in intensity, but the overall energy steadily diminished from flare to flare. Moreover, the peak photon energy of each flare “softened” by progressing from gamma-rays to X-rays (from higher to lower energy).

The prompt gamma-ray emission and the subsequent X-ray flares appear to form a continuously connected and evolving succession of events. “This pattern points to a continuous injection of energy from the central engine, perhaps fueled by sporadic infall of material onto a black hole. The black hole just keeps gobbling up gas and the engine keeps spewing out energy,” says Krimm, whose paper is scheduled for publication in the August 10 Astrophysical Journal. 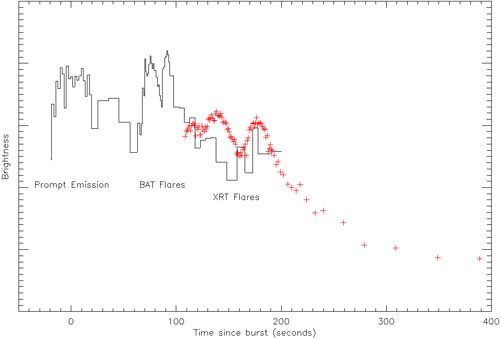 Image above: Swift's Burst Alert Telescope, and then its X-ray Telescope, picked up the prompt emission of GRB 060714, and then several flares. The outbursts gradually decreased in total energy, showing that the XRT flares were related to the prompt emission. The BAT data appears in black, and the XRT data appears in red. Even though the X-ray brightness of the first XRT flare was less than the next two flares, it was more energetic, since its X-ray photons had higher energy. + Click to see image without labels. Credit: NASA / Swift / Hans Krimm.

The rapid and large-scale variability of the X-ray flares argues strongly against the idea that they come from jets sweeping up the surrounding gas. Since the observed emission comes from a wide region, the afterglow should vary smoothly with time. Nobody has come up with a viable explanation for why the surrounding material would be so lumpy to lead to such rapid variability. "This particular GRB had a series of flares over a wide range in time that were bright enough that we could study their properties in detail,” says study coauthor Jonathan Granot of the Kavli Institute for Particle Astrophysics and Cosmology at Stanford University, Stanford, Calif. “It clearly shows a gradual evolution with time in the properties of the flares within the same GRB, while in other GRBs there are typically only one or two flares that are bright enough to be studied in detail, making it very hard to reach a similar conclusion." "This is a very important result," adds Swift principal investigator and study coauthor Neil Gehrels of NASA Goddard. "By chance, if you look at enough bursts you’ll find the one that opens the door. GRB 060714 shows that everything happening in the first few minutes is driven by the central engine."

Swift is managed by NASA’s Goddard Space Flight Center and was built and is operated in collaboration with Penn State University, the Los Alamos National Laboratory, and General Dynamics in the US; the University of Leicester and Mullard Space Sciences Laboratory in the UK; Brera Observatory and the Italian Space Agency in Italy; plus partners in Germany and Japan.
Related Link: