New Faraway Sensors Warn of Emerging Hurricane's Strength
Days before a growing hurricane possibly batters a local coastline, meteorologists rush to predict just how strong its winds and rains may grow knowing that lives and an area’s economy may depend on their results. A new study supported by NASA and the U.S. Office of Naval Research takes forecasters one step further to improving their ability to predict just how powerful an oncoming storm may become by using highly-sensitive sensors located thousands of miles from the storm to detect lightning outbreaks within a hurricane’s most dangerous area. 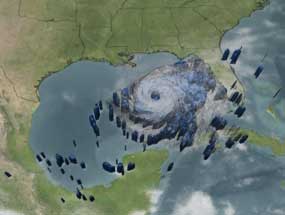 Researchers can now investigate with greater accuracy how the rate of lightning strikes produced within a hurricane's eyewall is tied to the changing strength of that hurricane. A hurricane’s eyewall is the inner heat-driven region of the storm that surrounds the “eye” where the most intense rainfall and most powerful winds occur. By monitoring the intensity of lightning near a hurricane’s eye, scientists will be able to improve their forecasts of when a storm will unleash its harshest conditions.

During the study, researchers used data from a growing network of new, long-range, ground-based lightning sensors, a NASA satellite and aircraft-based sensors. They explored the relationship between eyewall lightning outbreaks and the intensity of two of the most severe Atlantic storms on record before they made U.S. landfall: category five hurricanes Katrina and Rita. An article on this research, also supported by the U.S. Office of Naval Research, will be published in the American Meteorological Society's Monthly Weather Review later this year. 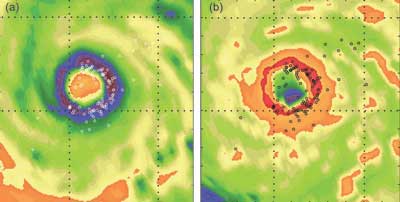 Image above: TRMM's Microwave Imager collected data as the satellite passed over the center of Hurricane Rita and lightning strike locations (circles) on Sept. 21, 2005. The left image indicates the temperature of the ice particles; the right image indicates the concentration of ice particles in the hurricane eyewall. Ice is important for charge separation in the clouds needed to produce lightning. Credit: NASA

"There are very few observing systems that offer a broad view of a storm over the open ocean where hurricanes tend to build or lose strength," said lead author Kirt Squires, a recent graduate of the meteorology program at the University of Hawaii in Honolulu. "What’s really compelling about the new sensors is their increased sensitivity to pick up lightning's electromagnetic signal over water from such a long distance. As a result, we can see thunderstorm activity over the ocean from thousands of miles away for the first time. This development is essential to improving the way meteorologists can look at a growing storm to judge just how harsh it will be."

When water condenses from vapor into a cloud droplet, latent or hidden heat is released, which in turn builds updrafts – air moving upwards in a cloud. Latent heat provides the energy that fuels hurricanes. If the ensuing updrafts are strong enough, they can cause the separation of charge that produces lightning. The tight correlation between the rate of lightning strikes, the amount of rainfall and the heat released in the eyewall of a storm allows the lightning rate data to be useful in computer models that forecast hurricane track and intensity. 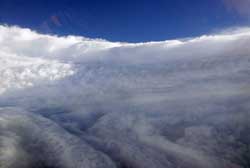 "Hurricane forecasters and researchers are very interested in developing methods that allow a continuous examination of the structural growth of the eyewall within hurricanes," said co-author Steven Businger, a senior professor of meteorology at the University of Hawaii. "The fact that lightning is directly linked to the heat energy released in the eyewall makes it a priority for us to examine the evolution of lightning within a storm."

Researchers studied data on intensity and lightning strike rate from hurricanes Katrina and Rita, both from 2005. They were trying to determine whether a link existed between the two traits. The researchers combined data from NASA's Tropical Rainfall Measuring Mission satellite's microwave radiometers and from sensors onboard the National Oceanic and Atmospheric Administration’s P-3 “hurricane hunter” aircraft that fly into the storm, with the enhanced sensor capability of the NASA co-funded Pacific Lightning Detection Network. 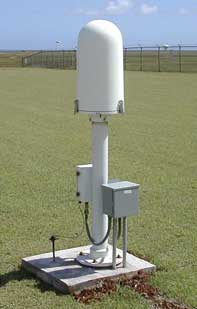 The network comprises four state-of-the-art, long-range, high-sensitivity sensors located around the central northern Pacific Ocean. Businger is working with the U.S. division of Finnish technology firm Vaisala, Tucson, Ariz., and other agencies to expand the network with eight additional sensor sites by the end of 2008. It is part of the larger North American Lightning Detection Network of nearly 200 sensors that monitors lightning over the Gulf of Mexico and the Atlantic and Pacific oceans.

Though Businger acknowledges that more research is needed, results from this study show that the growth and density of lightning strikes in a hurricane's eyewall provide important insight into the inner workings of the most powerful storms on Earth, information that may in the future help save lives through improved hurricane forecasts.