Customized Telemetry System for the James Webb Space Telescope Successful
Once it launches in 2013, the James Webb Space Telescope will be able to communicate with the Earth thanks to a customized and modified "off-the-shelf" system that has been recently and successfully tested by Northrop Grumman Corporation, the prime contractor on the telescope. 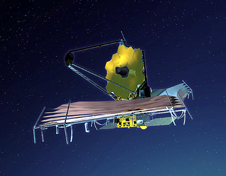 The customized off-the-shelf computer system will be used to send commands to the Webb telescope and collect its telemetry data. Telemetry is the term used to describe the automatic measurements made by a spacecraft in orbit and then transmitted by radio signal to the Earth. The telemetry contains information describing the spacecraft health which is critical for the engineers on the ground to receive in order to keep the spacecraft operating well.

Northrop Grumman worked with the Raytheon Corporation and recently completed the system acceptance test of a Common Command and Telemetry System (CCTS). This CCTS will actually be used in both the Webb telescope and another future mission called the "National Polar-orbiting Operational Environmental Satellite System (NPOESS)." The benefit of using the same customized software in both missions is one of cost savings.

This is the first time a joint CCTS development team included engineers from two different programs, the Webb telescope and the NPOESS satellite. Alexis Livanos, Corporate Vice President and President of Northrop Grumman’s Space Technology sector said "Two customers with two separate programs were willing to trust our collaboration and teamwork to align schedules so that the same system could be used."

The telemetry system they used is Raytheon’s ECLIPSE product. It's a commercial off-the shelf command and telemetry product that was modified to support both satellite flight operations and integration of the spacecraft components on the James Webb Space Telescope and NPOESS.

Northrop Grumman and Raytheon increased test requirements to bring together the way two different satellites communicate and the needs of their users. Software requirements were verified on spacecraft and ground equipment simulators at Northrop Grumman over a four-week period that ended in August. 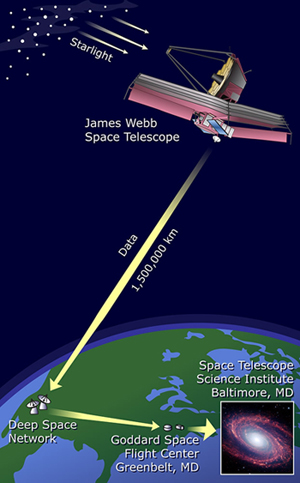 Image right: The Webb telescope sends data to ground stations on Earth, which route the data to the Space Telescope Science Institute for processing and distribution. Click image for higher resolution. Credit: STScI

The testing of the customized software was the last step in a process that took four years of development at Raytheon. Raytheon was responsible for developing this system for Northrop Grumman, who are building both the Webb telescope and NPOESS. During the tests, 1300 requirements were met. The objective of the testing was to verify the ability to send commands, receive telemetry, transform raw data into engineering values, and to control and monitor the test hardware.

The CCTS ECLIPSE software has been delivered to scientists and engineers at the Goddard Space Flight Center who will use it to develop, test, and incorporate it into their instruments for the James Webb Space Telescope.

The James Webb Space Telescope, designed to succeed the Hubble Space Telescope, will be NASA's premier space observatory. Northrop Grumman is the prime contractor, leading a team in the telescope’s design and development under contract to NASA Goddard. NPOESS is the nation's next-generation low-Earth orbiting remote sensing system and will provide environmental data to military and civilian users. Both are scheduled for launch in 2013.