GREENBELT, Md. - A preliminary design review has concluded and verified the integrated performance of all subsystems in the Optical Telescope Element on NASA’s James Webb Space Telescope.

The Optical Telescope Element or OTE is the "eye" of the Webb Observatory. The telescope consists of a 6.5-meter (21.3 foot) primary mirror; secondary, tertiary and fine steering mirrors; and supporting structures, deployable tower and control electronics. 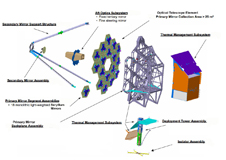 Image right: The Optical Telescope Element (OTE) is the eye of the James Webb Space Telescope. The OTE gathers as much light as possible coming from space and provides it to the science instruments, labeled in this diagram. Click image for enlargement. Credit: NASA

"Meeting rigorous technology development requirements and successfully completing component design reviews earlier this year have given us confidence that the telescope will perform its mission within our cost and schedule commitments," said Martin Mohan, JWST program manager for Northrop Grumman’s Space Technology sector. Northrop Grumman is NASA’s prime contactor for the Webb Telescope, leading the design and development effort under contract to NASA Goddard. 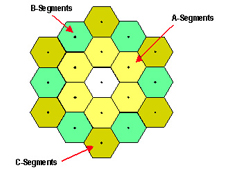 Image right: So that the segments work together as a single large mirror, the 18 mirror segments have been divided into 3 groups of six mirrors, each group having a slightly different shape. Click image for enlargement. Credit: NASA

Last January, before a team of experts assembled by NASA, the Northrop Grumman the telescope team demonstrated that the technology ready to move into the detailed engineering phase. Technology Readiness Level 6 was achieved for all critical telescope components, meaning prototypes had been successfully tested in a thermal vacuum chamber. The thermal vacuum simulates the very cold temperatures and vacuum of space.

At the review, the team also presented a plan for the final assembly and verification of the telescope. This includes all subsystems, backplane, thermal controls and hardware for sub-assemblies as well as simulated space environment testing at Johnson Space Center, Houston. 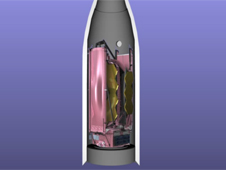 Image right: This image shows how the James Webb Space Telescope and its 18 mirrors can fold up to fit in the launch vehicle. View related animation Credit: NASA

Significant progress is being made on key portions of the telescope. Machining of the 18 primary mirror flight segments was completed earlier this year and currently the backplane, which supports the primary mirror, is being fabricated.

The Webb Telescope will be the premier space observatory of the next decade, serving thousands of astronomers worldwide. It will study every phase in the history of our universe, from the first galaxies assembled in the universe, to the formation of solar systems potentially capable of supporting life, to the evolution of our own Solar System.