Engineers 'Can' Do Anything to Build the James Webb Space Telescope Model
Engineers "can" do almost anything it seems. During the week of Feb 19, they constructed a model of the James Webb Space Telescope out of cans. It was on display at Northrop Grumman Space Technology in Redondo Beach, Calif. It was built to highlight National Engineer's Week. 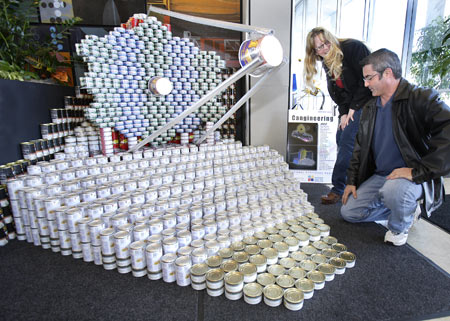 The model was constructed with 3,234 cans, weighing 2,348 pounds and covering 6 feet by 10 feet by 5 feet as part of the "Cangineering" project, a part of a week-long series of educational outreach activities. The 20-member team who built it required about 80 man-hours to build the sculpture. The real Webb Telescope is being built by Northrop Grumman to search for the first galaxies or luminous objects formed after the Big Bang, determine how galaxies evolved, and observe the formation of stars.

The model was on display throughout the week, and was then disassembled and donated to Amigos Sin Barreras, a food bank based in Redondo Beach, Calif. 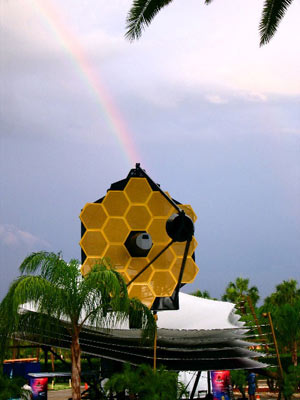 The full-scale JWST model was built by Northrop Grumman to give the viewing public a better understanding of the size, scale and complexity of this breakthrough satellite. Specifically designed for an environment subject to gravity and weather, the model is constructed mainly of aluminum and steel, weighs 12,000 lbs., and is approximately 80 feet long, 40 feet wide and 40 feet tall. The Webb Telescope is slated for launch in 2013. Credit: Northrop Grumman and NASA