'Shot in the Dark' Star Explosion Stuns Astronomers
A team of astronomers has discovered a cosmic explosion that seems to have come from the middle of nowhere — thousands of light-years from the nearest galaxy-sized collection of stars, gas, and dust. This "shot in the dark" is surprising because the type of explosion, a long-duration gamma-ray burst (GRB), is thought to be powered by the death of a massive star. 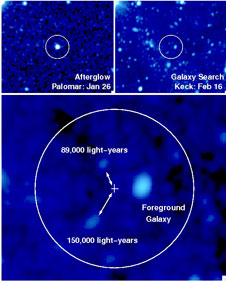 Image right: The robotic Palomar 60-inch telescope imaged the afterglow of GRB 070125 on January 26, 2007. Right: An image taken of the same field on February 16 with the 10-meter Keck I telescope reveals no trace of an afterglow, or a host galaxy. The white cross in this zoom-in view marks the GRB’s location. The two nearest galaxies, and their distances, are marked with arrows. Credit: B. Cenko, et al. and the W. M. Keck Observatory. Tadpole HST.jpg
+ Click for larger image
+ Click for unlabeled version

"Here we have this very bright burst, yet it's surrounded by darkness on all sides," says Brad Cenko of the California Institute of Technology, Pasadena, Calif., lead author of the team’s paper, which has been accepted for publication in The Astrophysical Journal. "The nearest galaxy is more than 88,000 light-years away, and there's almost no gas lying between the burst and Earth."

The blast was detected on January 25, 2007, by several spacecraft of the Inter-Planetary Network. Observations by NASA's Swift satellite pinpointed the explosion, named GRB 070125 for its detection date, to a region of sky in the constellation Gemini. It was one of the brightest bursts of the year, and the Caltech/Penn State team moved quickly to observe the burst’s location with ground-based telescopes.

Using the team's robotic 60-inch telescope at Palomar Observatory in Calif., the astronomers discovered that the burst had a bright and fast-fading afterglow in visible light. This prompted them to observe the afterglow in detail with two of the world's largest telescopes, the 8-meter Gemini North telescope and 10-meter Keck I telescope, both near the summit of Hawaii's Mauna Kea. 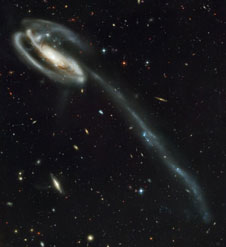 Image left: A recent galaxy collision produced the long tail in the Tadpole Galaxy. If GRB 070125 exploded in a similar tail, only Hubble could detect the tail. Credit: NASA, H. Ford, et al.
+ Click for a larger image.
+ Click for print resolution version.

What came next was a total surprise. Contrary to experience with more than a hundred previous GRBs, Gemini spectra revealed no signs of dense gas and dust absorbing the light of the afterglow. A trace of magnesium revealed that the burst took place more than 9.4 billion years ago, as deduced by the shift in wavelength of the afterglow’s light, and that the surrounding gas and dust was more tenuous than the environment around any previous burst.

To further pin down the environment that could produce such an unusual explosion, the group obtained Keck images of the location of GRB 070125 long after its afterglow light had faded away. Surprisingly, the resulting images showed no galaxy at this location. "A Keck image could have revealed a very small, faint galaxy at that distance," says coauthor Derek Fox of Penn State. Astronomers have amassed a great deal of evidence that GRBs are triggered by the explosive deaths of massive stars, which live very short lives. Because of their short lifespans, massive stars don’t have time to wander far from their birthplaces, usually dense clouds of gas and dust inside respectable-size galaxies. So GRB 070125 raises the perplexing question of how a massive star could be found so far away from any galaxy.

"Big stars live fast and die young, without much time to move around," says Fox. "So if this massive star died far away from any galaxy, the key question is, how did it manage to be born there?" The formation of massive stars requires similarly massive aggregations of gas and dust, which are usually found in bright galaxies.

One possibility is that the star formed in the outskirts of an interacting galaxy, as seen in the famous Hubble Space Telescope picture of the "Tadpole" galaxy, UGC 10214. "In the local universe, about one percent of star formation happens in tidal tails, on the outskirts of two interacting galaxies," says Cenko. "So it might even make sense to find one in 100 gamma-ray bursts in such an environment."

If this idea is correct, it should be possible to detect the tidal tail hosting GRB 070125 by taking a long exposure with the Hubble Space Telescope. "That's definitely our next stop," says Cenko.

"Many Swift discoveries have left astronomers scratching their heads in befuddlement," adds Swift lead scientist Neil Gehrels of NASA Goddard Space Flight Center in Greenbelt, Md. "But this discovery of a long GRB with no host galaxy is one of the most perplexing of all."