Closing in on a Hot Mystery
Imagine you are sitting around a campfire. Move closer to the fire, and you get hotter. Move away, and you get cooler. Pretty basic, right? Well, the closest star, our sun, doesn't seem to be getting this. As you move away from the solar surface, into the sun's outer atmosphere, the corona, it actually gets a lot hotter before it cools off. The solar surface is about 10,000 degrees Fahrenheit, while temperatures in the corona soar to millions of degrees.

Although scientists have some ideas of what might heat the solar corona, there is no universally accepted explanation yet. Many mechanisms might contribute to coronal heating; a few leading contenders are magnetic reconnection (when twisted magnetic fields break apart and rejoin); sound waves produced in the sun's churning outer layer; and waves of magnetic energy called Alfven waves. 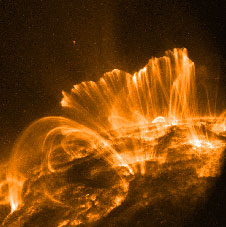 Alfven waves were a long-time suspect in the coronal heating mystery, but till now their presence in the solar corona was only circumstantial. "With help from the Hinode spacecraft, we now have irrefutable evidence of Alfven waves moving along coronal loops," said Dr. Leon Ofman, a solar physicist at NASA's Goddard Space Flight Center in Greenbelt, Md.

Coronal loops are fountains of plasma (a gas made up of electrically charged particles) trapped by the sun's magnetic fields. Coronal loops look like giant arches sticking out of the solar surface, and many are large enough to span several Earths.

An Alfven wave is a vibration of a magnetic field line that carries the charged particles in plasma along with it. "In other words, it is similar to a vibrating string with beads," says Ofman. "This type of wave was first proposed to exist in 1942 by Hannes Alfven, a Swedish scientist who won the Nobel Prize in Physics in 1970. Alfven waves were later found to exist in laboratory experiments with magnetized plasma, and in space," said Ofman.

"Hinode detected the Alfven waves with its Solar Optical Telescope instrument. This is a high-resolution telescope in space that is sensitive to the emission of relatively cool material that can fill coronal loops due to eruptions caused by a flare. A movie made from a sequence of images showed a clear pattern of periodic motion of coronal loops. The loops vibrated side-to-side, which is typical for an Alfven wave. The relation between the period of the vibrations and the parameters of the loop (its length, density, and temperature) further reinforced the conclusion that what we see is really an Alfven wave," said Ofman.

According to Ofman, Alfven waves could heat the solar corona by their vibrations: "As the magnetic field lines vibrate, they experience friction with the surrounding magnetized material. The friction results in heating of the corona and damping of the wave motions."

The next step to understand the sun's mysteriously hot atmosphere is to discover how much Alfven waves contribute to coronal heating, to see whether it’s the dominant force or if the other possible heating mechanisms play major roles.

Ofman will present these results in the upcoming American Geophysical Union meeting in San Francisco, Calif. His co-author is Dr. Tongjiang Wang, a postdoctoral researcher at the Catholic University of America, Washington, who works at Goddard. This research is part of a series of papers about observations of Alfven waves with Hinode. Hinode (formerly Solar B) is a mission to investigate the interaction between the sun's magnetic field and its corona. It is a collaboration among the space agencies of Japan, the United States, the United Kingdom, and Europe.