Grow Text SizeShrink Text Size
NASA Mission Checks Health of Greenland's Ice Sheet and Glaciers
A NASA-led research team has returned from Greenland after an annual three-week mission to check the health of its glaciers and ice sheet. About 82 percent of Greenland is made up of a giant ice sheet. During the Arctic Ice Mapping Project, researchers measured critical areas of the island's ice sheet as well as its glaciers and monitored changes that may be connected to global climate change. 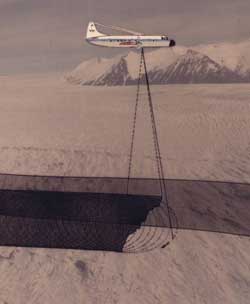 The science team, using laser and radar instruments aboard aircraft, has been closely monitoring the changes in the ice cover since 1991. Past measurements from the team have shown that areas of ice along the Greenland coast have been thinning while inland areas have thickened. However, when these changes are taken as a whole, Greenland has experienced a significant loss of ice.

The data from past mapping missions and from Earth-orbiting satellites such as NASA's ICESat spacecraft has shown that the ice sheet and glaciers have been melting at an increasing rate over the past several years.

"Knowledge of how ice sheets and glaciers like those on Greenland are changing provide an indirect measure of sea-level changes and indicate trends in world climate," said Bill Krabill, lead investigator of the Greenland mission from the NASA Wallops Flight Facility, Wallops Island, Va. "Some of the island's major glaciers have sped up since the turn of the century, with documented thinning from 65 to nearly 100 feet per year. With this mission we measured what's happening to Greenland's ice with a low-flying state-of-the-art laser from just a third of a mile above the surface."

"This mission builds on our existing data from past flights and aids in correlating data from the ice-observing satellites," said Krabill. "The16 years of very precise data we've gathered over the same flight paths gives us a very good look at the health of Greenland’s ice cover." 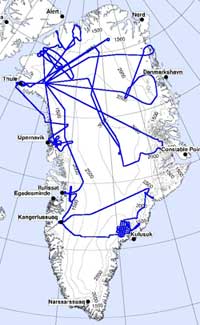 The 19-person research team, which headed for Greenland on May 1, used a Wallops-built scanning laser system aboard a GPS-guided NASA P-3B aircraft to take detailed measurements of ice elevations, with accuracy within a few inches. Also onboard, an ice-penetrating radar system from the University of Kansas, Lawrence, provided elevation measurements of the bedrock as far as two miles below the ice sheet's surface. From the measurements of these two instruments, researchers determine the thickness of the ice.

"Each year, we refer to the views of glaciologists, NASA radar data, and information from other federal agencies to locate areas where thinning may be occurring, and fly out to those critical areas that may be changing more rapidly," said Krabill. In the end, weather conditions always dictate our data gathering success. We were terrain-hopping at just a third of a mile above the surface with a laser pulsing 5,000 times per second that cannot shoot through the clouds. So low-lying clouds could have prevented us from capturing any data."

This year, the aircraft also carried two new, high-altitude ice-measuring radars tested by their developers, Ohio State University, Columbus, and the Johns Hopkins University Applied Physics Laboratory, Laurel, Md. If effective, the new sensors could serve as precursors to instruments that could be used aboard a future satellite mission.

Multiple aircraft lifted off from the former U.S. air base Kangerlussauq and Thule Air Base, and primarily covered flight paths flown nearly every year since 1991.

"The aircraft performed in outstanding fashion this year, with no down time in the field, and the crew was outstanding on what were relatively long eight-hour missions," Krabill said. "All of our objectives for the sensors onboard were accomplished. In about two months, we'll finalize results that will offer researchers around the world a glimpse of what we expect will indicate a continuing trend of ice loss on the island."