NASA and Gemini Probe Mysterious Distant Explosion
Using the powerful one-two combo of NASA’s Swift satellite and the Gemini Observatory, astronomers have detected a mysterious type of cosmic explosion farther back in time than ever before. The explosion, known as a short gamma-ray burst (GRB), took place 7.4 billion years ago, more than halfway back to the Big Bang. 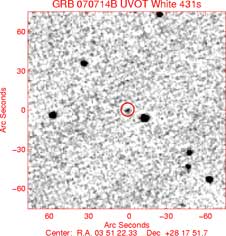 "This discovery dramatically moves back the time at which we know short GRBs were exploding. The short burst is almost twice as far as the previous confirmed record holder," says John Graham of the Johns Hopkins University, in Baltimore, Md. Graham is presenting his group’s discovery on Tuesday in a poster at the American Astronomical Society’s 2008 winter meeting in Austin, Texas.

GRBs are among the most powerful explosions in the universe, releasing enormous amounts of energy in the form of X-rays and gamma rays. Most bursts fall in one of two categories: long bursts and short bursts, depending on whether they last longer or shorter than three seconds. Astronomers think that long GRBs are triggered by the collapse and explosion of massive stars. In contrast, a variety of mechanisms have been proposed for short bursts. The most popular model says that most short GRBs occur when two neutron stars smash into each other and collapse into a black hole, ejecting energy in two counterflowing beams. 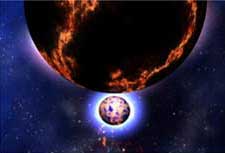 Image left: Nobody knows how the short gamma-ray burst GRB 070714B was triggered, but a leading possibility is the inspiral and merger of two neutron stars, depicted in this artist rendition. > Click to see full view > Click for high resolution image Credit: NASA/Dana Berry

The record-setting short burst is known as GRB 070714B, since it was the second GRB detected on July 14, 2007. Swift discovered the GRB in the constellation Taurus. The burst’s high energy and 3-second duration firmly place it in the short GRB category. Rapid follow-up observations with the 2-meter Liverpool Telescope and the 4-meter William Herschel Telescope found an optical afterglow in the same location as the burst, which allowed astronomers to identify the GRB’s host galaxy.

Next, Graham and his colleagues, Andrew Fruchter of the Space Telescope Science Institute, in Baltimore, and Andrew Levan of the University of Warwick, U.K., trained the 8-meter Gemini North Telescope in Hawaii on the galaxy. It revealed that the host galaxy has a spectral line from ionized oxygen. The amount that line was shifted toward the red end of the spectrum yields a redshift of 0.92. A redshift of 0.92 translates to a distance of 7.4 billion light-years, meaning the explosion occurred 7.4 billion years ago.

"The fact that this short burst is so far away means this subclass has a broad range of distances, although they still tend to be closer on average than long GRBs," says Swift lead scientist Neil Gehrels of NASA’s Goddard Space Flight Center in Greenbelt, Md.

Gehrels adds that GRB 070714B’s energy is about 100 times higher than average for short bursts, and is more similar to the typical energy of a long GRB. "It is unclear whether another mechanism is needed to explain this explosion, such as a neutron star-black hole merger. Or it could be that there are a wide range of energies for neutron star-neutron star mergers, but that seems unlikely." 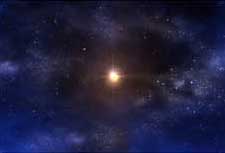 Image right: These illustrations show the view from afar. In the third image, we see two jets shooting away from the collision site. These jets are where the gamma rays are emitted. > Click to view full image > Click for high resolution image Credit: NASA/Dana Berry

Another possibility is that GRB 070714B concentrated its energy in two very narrow beams, and one of the beams happened to be aimed directly at Earth. This would make the burst seem more powerful than it really was. Perhaps most short GRBs eject their energy in wider and less-concentrated beams.

"We now have a good idea of the type of star that produces the brighter long bursts. But how short bursts are formed remains a mystery," says Fruchter.

Swift is managed by NASA Goddard and was built and is operated in collaboration with Penn State University, the Los Alamos National Laboratory, and General Dynamics in the U.S.; the University of Leicester and Mullard Space Sciences Laboratory in the U.K.; Brera Observatory and the Italian Space Agency in Italy; plus partners in Germany and Japan.