Scientists Find High Energy Systems Hidden in 'Gas Cocoon'
Astronomers have found a new class of objects in space: a neutron star orbiting inside a cocoon of cold gas and/or dust that hides a bloated supergiant star. In a strange twist of fate, these objects may be tremendously luminous, but the enshrouding cocoon absorbs almost all their emission, making them nearly invisible to telescopes on Earth until now.

This result, obtained through multi-wavelength observations, is of special interest because it revolutionizes the view scientists have on the formation, evolution, and fate of massive stars in close binary (twin star) systems. Furthermore, this clearly demonstrates that the GLAST satellite will likely discover more of these new and unexpected celestial objects.

This new class of objects was discovered using the European ”INTErnational Gamma-Ray Astrophysics Laboratory” (INTEGRAL) satellite. Twenty of these binary systems were found, with estimated distances lying between 7,000 and 25,000 light years from Earth, putting them all inside of our own Milky Way Galaxy. The nature of these sources was revealed through multi-wavelength observations, mainly from optical to mid-infrared (MIR) wavelengths, using European Southern Observatory (ESO) facilities.

Scientists have found that most of these sources are made up of a compact object orbiting a supergiant star, an enormous star with 30 times the Sun’s mass and 20 times its diameter. Stars like this eject a huge amount of cold gas and/or dust at a rate equivalent to emitting the mass of our Sun in just 100,000 years. This type of object is called a High Mass X-ray Binary System (HMXB) and in most cases the compact object is a neutron star, an object of about 1.4 solar masses concentrated in a radius of only 10 kilometers (6.2 miles). Normally, an object like this would be an intense source of X-rays as the tremendous gravity and magnetic fields of the neutron star interact with the dense gas and dust emitted from the more massive supergiant star. However, for this new class of objects the cocoon of cold gas and/or dust is so dense it absorbs most, but not quite all, of the high energy X-rays. Only multi-wavelength observations, from X-rays to infrared, were able to reveal the nature of such objects. 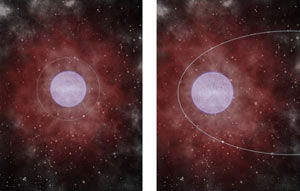 Image left: The most obscured celestial objects of our Galaxy: a neutron star orbiting around a supergiant star, inside a cocoon of dust created by the powerful wind of the supergiant star. Credit: University Paris 7 and Service d'Astrophysique, CEA, France

Since the cocoon of cold gas/dust totally blankets the whole system, the neutron star stays permanently inside this dense cocoon, so there is a persistent source of X-rays. But in the second class, such as IGR J17544-2619, the orbit is more eccentric, and the neutron star crosses only periodically into this dense cocoon of cold gas/dust covering the supergiant star, causing intermittent emission of X-rays during that time.

As Dr. Chaty, Associate Professor of Astrophysics at University Paris 7 and Service d'Astrophysique, CEA, France, points out, these findings are important because “…until now only a few high energy systems hosting supergiant stars were known, and none were exhibiting such a high absorption. We now have an example where we know the extent of the material causing this absorption, and also where it is coming from.”

"This finding will help us to understand the formation, evolution and fate of such massive stars in high energy binary systems. This result demonstrates that astronomers will likely discover previously unknown objects with the GLAST satellite, and that a multi-wavelength approach can be decisive to unveil their nature.”

Further work, both observational and theoretical, is therefore needed to study the environment of supergiant stars in binary star systems. GLAST, with its sensitivity to very high-energy gamma rays, will provide an ideal platform for follow-up observations. GLAST is slated for launch in the fall of 2007. It is a collaborative effort between NASA, the U.S. Department of Energy and institutions in France, Germany, Japan, Italy and Sweden. General Dynamics has been chosen to build the spacecraft.