NASA's New Gamma Ray Satellite Currently Lodging in a Comfortable 'Clean Room'
NASA's Gamma ray Large Area Telescope (GLAST) awaits its launch in December this year and is currently living in a "clean room" at General Dynamics in Gilbert, Ariz., while it's being checked and tested.

A clean room is an environment that is used in scientific research or for building things like computer chips and satellites. It is designed to have low levels of contaminants or environmental pollutants such as aerosols (tiny airborne particles), chemical vapors, dust, and airborne microscopic organisms.

Clean rooms basically have controlled levels of contaminants that are specified by the number of particles per cubic meter (3 feet, 3 inches) at a specified particle size. Continually running the room air through filters limits the contaminants. 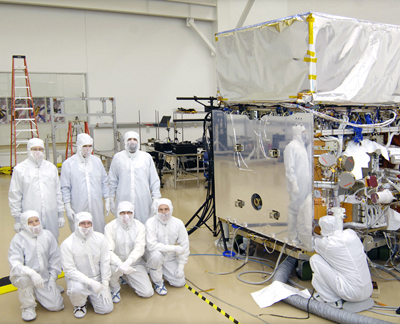 Inside the clean room, members of the GLAST team wear protective suits, known as "bunny suits," at all times. The special suits prevent dirt and dust from their clothing and other contaminants from entering the room. A clean room provides the controlled environment necessary to make sure GLAST is in the best condition at the time of launch.

"Working in these bunny suits is inconvenient, but necessary," said Steve Ritz, GLAST project scientist at NASA Goddard Space Flight Center, Greenbelt, Md. "With a million channels of electronics and high-tech sensitive instrumentation, we must avoid contamination. Although the cleanliness requirements for GLAST are relatively modest, an unwanted piece of every-day junk in the wrong place could cause a big headache later in the mission. Dust never sleeps."

Satellites like GLAST are assembled and checked in clean rooms because the instruments on board are very sensitive to dust, and they can degrade when exposed to humidity. A clean room maintains a constant temperature and humidity, eliminates dust, and protects the satellite during its development, construction and testing. Even the floor of a clean room is specially constructed, so that static electricity cannot build up. Static electricity can also harm instruments on satellites.

Once GLAST is launched from Florida and working in orbit, it will detect X-rays and gamma rays in a range from thousands to hundreds of billions of times more energy than the light visible to the human eye. Radiation of such power can only be generated under the most extreme conditions, such as in disks of gas swirling around black holes and neutron stars at near light speed. GLAST will therefore observe the most energetic objects in the Universe!

Scientists want to study these high-energy objects and events because they could give us a totally new understanding of our Universe, and reveal things we've never seen before.

Some gamma rays travel as much as 10 billion light years through the universe to tell us their stories, but they scatter on the atmosphere and are lost. GLAST goes above the atmosphere to gather their information.

GLAST will be "moving out" of the clean room and on the launch pad in the winter of 2007.