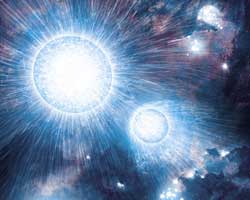 Image right: An artist depicts the binary system LH54-425, which consists of two very massive stars. The larger star’s powerful wind overpowers the smaller star’s wind, creating a region of hot gas where the outflows collide. LH54-425 is in the Large Magellanic Cloud, a satellite galaxy of the Milky Way about 165,000 light-years from Earth. Click image to enlarge. + High resolution TIFCredit: NASA illustration by Casey Reed.

The system, known as LH54-425, is located in the Large Magellanic Cloud, a satellite galaxy of our Milky Way. The binary consists of two O-stars, the most massive and luminous types of stars in the Universe.

Spectra obtained by Georgia State University astronomer Stephen Williams at the 1.5-meter (4.9 foot) telescope at the Cerro Tololo Inter-American Observatory in Chile show that the two stars contain about 62 and 37 times the mass of our Sun. “The stars are so close to each other -- about one-sixth the average Earth-Sun distance -- that they orbit around a common center of mass every 2.25 days,” says Williams’ colleague Douglas Gies of Georgia State University, Atlanta. With a combined mass of about 100 suns, the system is one the most extreme binaries known. The stars are probably less than 3 million years old.

Each star blows off a powerful stellar wind, and FUSE’s observations have provided the first details of what happens when the two supersonic winds collide. The wind collision zone wraps around the smaller star and produces a curved surface of superheated gases that emit X-rays and far-ultraviolet radiation. FUSE is ideal for these measurements because the lines that best indicate the properties of stellar winds show up in the far ultraviolet part of the spectrum, where FUSE is most sensitive. 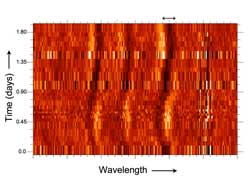 Image left: This image from the FUSE satellite shows how LH54-425’s ultraviolet spectrum changes during the 2.25-day orbit. The vertical wavy bands are Doppler shifts due to the stars orbiting each other at 1.1 million miles per hour. The arrow at the top shows a one-million-mile-per-hour shift. The wavy features are produced by very hot gases in the stellar winds that contain silicon and phosphorus. Click image to enlarge. Credit: George Sonneborn (NASA/GSFC) and FUSE.

The more massive star is shedding material at a rate of 500 trillion tons per second (about 400 times greater than the rate the sun loses mass through the solar wind), with a speed of 5.4 million miles per hour. The smaller star is ejecting mass at about one-tenth the rate of its sibling. The mass loss rate of both stars is consistent with other single stars having the same temperature and luminosity.

As the stars age and swell in size, they will begin to transfer substantial amounts of mass to each other. This process could begin in a million years. The stars are orbiting so close to each other that they are likely to merge as they evolve, producing a single extremely massive star like the more massive member of the Eta Carinae binary system. Eta Carinae is one of the most massive and luminous stars in the Milky Way Galaxy, with perhaps 100 solar masses. 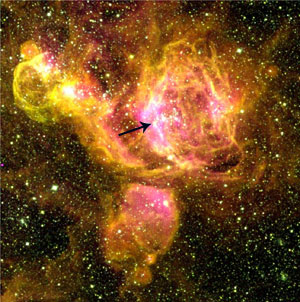 “The merger of two massive stars to make a single super star of over 80 suns could lead to an object like Eta Carinae, which might have looked like LH54-425 one million years ago,” says Sonneborn. “Finding stars this massive so early in their life is very rare. These results expand our understanding of the nature of very massive binaries, which was not well understood. The system will eventually produce a very energetic supernova.”

“These stars are evolving in the blink of an eye compared to the sun, which has looked pretty much the same for over 4 billion years,” adds Rosina Iping of the Catholic University, Washington and NASA Goddard, leader of the team that observed LH54-425 with FUSE. “But this binary looks totally different from Eta Carinae even though there is maybe only one million years difference in age. These massive stars zoom through their life cycle really fast. Will this binary system produce something like Eta Carinae? We don’t know.”

Launched in 1999, FUSE is a NASA Explorer mission developed in cooperation with the French and Canadian space agencies by Johns Hopkins University, University of Colorado, and University of California, Berkeley. NASA’s Goddard Space Flight Center, Greenbelt, Md., manages the program.