WASHINGTON - After an eight-year run that gave astronomers a completely new perspective on the universe, NASA has concluded the Far Ultraviolet Spectroscopic Explorer mission. The satellite, known as FUSE, became inoperable in July when the satellite lost its ability to point accurately and steadily at areas of interest. NASA will terminate the mission Oct. 18. 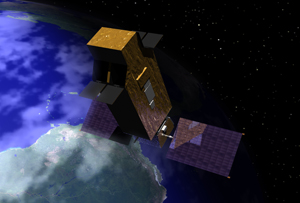 Image right: FUSE studies primordial chemical relics of the Big Bang, from which all the stars, planets and life evolved. FUSE was launched aboard a Boeing Delta II rocket, and lifted off from Cape Canaveral Air Station, Florida on June 24, 1999. Click image for enlargement. Credit: NASA

"FUSE accomplished all of its mission goals and more," said Alan Stern, associate administrator for the Science Mission Directorate at NASA Headquarters, Washington. "FUSE vastly increased our understanding of our galaxy's evolution and many exotic phenomena and left a strong legacy on which to build the next generation of investigations and missions."

Launched in 1999, FUSE helped scientists answer important questions about the conditions in the universe immediately following the Big Bang, how chemicals disperse throughout galaxies, and the composition of interstellar gas clouds that form stars and solar systems.

Image above: This is a false-color image of the star AE Aurigae (bright source of light slightly off center of image) embedded in a region of space containing smoke-like filaments of carbon-rich dust grains, a common phenomenon. Such dust might be hiding deuterium, an isotope of hydrogen, and stymieing astronomers' efforts to study star and galaxy formation. The FUSE satellite has surveyed the local deuterium concentration in the galaxy and found far more than expected. Because deuterium is a tracer of star and galaxy evolution, this discovery could radically alter theories about how stars and galaxy form. Credit: T.A. Rector and B.A. Wolpa, NOAO, AURA, and NSF

Examples of the many successes FUSE achieved during its mission:

By measuring abundances of molecular hydrogen (made of two hydrogen atoms), FUSE showed that a large amount of water has escaped from Mars, enough to form a global ocean 100 feet deep.

FUSE observed a debris disk that is surprisingly rich in carbon gas orbiting the young star Beta Pictoris. The carbon overabundance indicates either the star is forming planets that could end up as exotic, carbon-rich worlds of graphite and methane, or Beta Pictoris is revealing an unsuspected phenomenon that also occurred in the early solar system.

FUSE discovered far more deuterium, a form of hydrogen with a proton and a neutron instead of just one proton, in the Milky Way galaxy than astronomers had expected. Deuterium was produced in the early universe, but this isotope is destroyed easily in stellar nuclear reactions. "FUSE showed that less deuterium has been burned in stars over cosmic time, in agreement with modern models for the evolution of the galaxy and the recent Wilkinson Microwave Anisotropy Probe results," said Warren Moos, FUSE principal investigator, Johns Hopkins University, Baltimore.

FUSE saw that an atmosphere of very hot gas surrounds the Milky Way. The ubiquity of hot gas around our galaxy demonstrates the galaxy is even more dynamic than expected.

By detecting highly ionized oxygen atoms in intergalactic space, FUSE showed that about 10 percent of matter in the local universe consists of million-degree gas floating between the galaxies. This discovery might help resolve the long-standing mystery of the universe's "missing baryons." Baryons are subatomic particles, often protons and neutrons. Calculations of how many baryons were produced in the very early universe predict about twice as many baryons as astronomers have observed. The rest of the missing baryons might exist as even hotter gas, which could be observed by future X-ray observatories such as NASA's Constellation-X.

Although FUSE's mission has ended, NASA's ultraviolet study of the universe continues. In 2008, NASA will conduct a servicing mission to the Hubble Space Telescope to install a new ultraviolet spectrograph on the telescope and repair another. The new Cosmic Origins Spectrograph, or COS, is designed to study remote galaxies and nearby stars in the ultraviolet. Hubble's Space Telescope Imaging Spectrograph also will be repaired. That instrument had ultraviolet capabilities complementary to the COS and was used in conjunction with FUSE when both were operational. The spectrograph failed due to an electronic short in August 2004 after more than seven years of in-orbit operations.