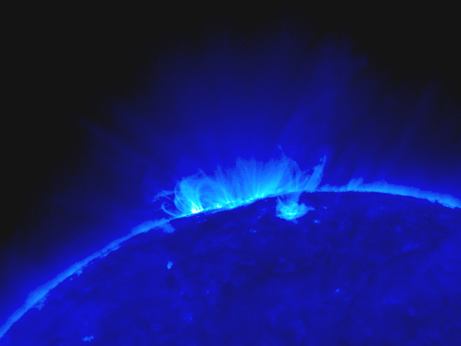 NASA's twin Solar Terrestrial Relations Observatories (STEREO) sent back their first images of the sun this week and with them a view into the sun's mounting activity.

Image above: A close up of loops in a magnetic active region. These loops, observed by STEREO's SECCHI/EUVI telescope, are at a million degrees C. This powerful active region, AR903, observed here on Dec. 4, produced a series of intense flares over the next few days. Credit: NASA

The other images show the sun's super-hot atmosphere. They were taken on Dec. 4, the first day of imaging observations for the Ahead spacecraft. The false color images show a number of bright magnetic active regions, including one on the far left edge of the sun which later produced a series of high energy flares and CMEs. 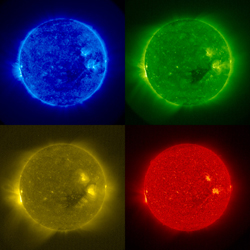 "Now we're holding our breath to see what the next big CME looks like in 3-D, so we can really start to answer some interesting questions."

After a successful launch on Oct. 25 from Cape Canaveral Air Force Station, Fla., STEREO spent the first few minutes separating from its stacked configuration aboard the single Delta II rocket. Shortly afterwards, mission operations personnel at The Johns Hopkins University Applied Physics Laboratory, (APL) Laurel, Md., monitored the two observatories as they traveled in an elliptical orbit from a point close to Earth to one extending just beyond the moon. 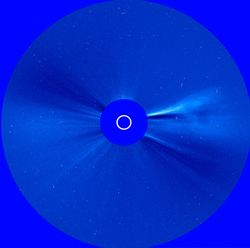 Image left:The first coronal mass ejection (CME) observed by STEREO. This image was taken on Dec. 9 with STEREO's SECCHI/Cor2 coronagraph. A coronagraph blocks the bright disk of the sun allowing scientists to see the sun's faint outer atmosphere, the corona. The white circle shows the location of the solar disk. The mass ejection can be seen on the right hand side of the image as outward directed streak ending in a faint ring. Click image to enlarge. + High resolution image Credit: NASA

"STEREO is the first mission using the moon's gravity to redirect multiple spacecraft, launched aboard a single rocket, to their respective orbits," said Ron Denissen, APL STEREO project manager. On Dec. 15, 2006, mission operations personnel at the laboratory used lunar gravitational swingbys to alter the spacecraft orbits, redirecting the "A" observatory to its orbit "ahead" of Earth. The "B" observatory will swing past the moon a second time on Jan. 21, redirecting it to an orbit "behind" Earth. The two will orbit the sun from this perspective, separating from each other by about 45 degrees per year. Scientists expect the two to be in position to produce 3-D images by April 2007.

"Our ultimate goal is seeing solar flares and coronal mass ejections in 3-D to better understand their origin, evolution and determine whether or not they're a threat to Earth," said Russell Howard, principal investigator for SECCHI, the imaging instrument suite aboard both observatories. Howard and his staff are a part of the Naval Research Laboratory (NRL) in Washington, DC.

Coronal mass ejections, - giant clouds of plasma shot out into space by the sun and X-ray emitting solar flares are the largest explosions in the solar system and can pack the force of a billion megaton nuclear bombs. They are caused by the buildup and sudden release of magnetic stress in the solar atmosphere above the turbulent active regions we see as sunspots. 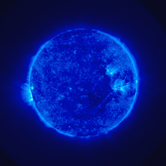 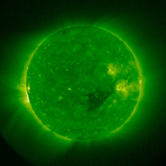 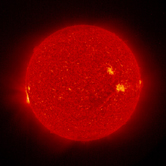 When directed at Earth, CMEs can produce spectacular aurora and disrupt satellites, radio communications and power systems. Energetic particles associated with these solar eruptions permeate the entire solar system and may be hazardous to spacecraft and astronauts.

Each STEREO observatory has 16 instruments. The PLAsma and SupraThermal Ion and Composition (PLASTIC) team, housed at the University of New Hampshire, Durham, N.H., started receiving data from its two instruments in early December. Researchers at the University of California, Berkeley, saw solar wind measurements from some of its In-situ Measurements of PArticles and CME Transients (IMPACT) instrument suite Nov.1. SWAVES the radio astronomy experiment, STEREO/WAVES, led by the Meudon Observatory in Paris, France obtained measurements just two days after launch on Oct 27.

“An integral part of exploration, heliophysics is the system science that unites all of the linked phenomena in the region of the cosmos influenced by a magnetically variable star like our sun,” said Madhulika Guhathakurta, NASA STEREO program scientist at NASA Headquarters, Washington. The STEREO mission represents the most significant upgrade and expansion to this system science as it will not only provide a rich package of upgraded sensors, but it will travel to new vantage points.”

Goddard manages the STEREO mission and APL designed and built the spacecraft. APL will maintain command and control of the observatories throughout the mission, while NASA tracks and receives the data, determines the orbit of the satellites, and coordinates the science results. STEREO is the third mission selected for NASA's Solar-Terrestrial Probe Program.