Brown conceived the idea while working with organizations in Niger, West Africa, that provide information regarding failed crops and help address local farmers' worries about feeding their families. Brown's new approach could improve the ability for government and humanitarian aid officials to plan and respond to drought-induced food price increases in Niger and elsewhere.

Supply and demand largely dictate food prices, with greater supply leading to lower prices and less supply leading to higher prices. During a food crisis in semi-arid regions like Niger, food shortages are often brought on when lack of rainfall significantly reduces the amount of grain farmers are able to grow. Farmers in regions like Niger are able only to grow a few drought-resistant crops, and therefore must buy grain at unaffordably high prices at the end of the year to make up for shortfalls in production. This scenario could drive a drought-driven food security crisis. A lack of locally-produced and affordable grain, coupled with increased prices and reduced access to food, could lead to starvation and hunger-related illness in the most vulnerable segments of society.

Images right: The left image shows how dry season climate browns millet crops in a farmer's field when compared to the right image taken during the Wet season when millet crops grow green and lush in the same farmer's field. The images illustrate the stark differences between crops that receive adequate rainfall and those that do not, whether in countries like Senegal (where photos were taken) or in countries like Niger. Credit: Molly Brown/NASA

Brown, the lead author of a study to be published early next year in the journal Land Economics, said that until now officials have primarily studied the after effects of occurrences like floods or droughts that might affect crop production as their best means of warning of a coming food security crisis. "With this new study, for the first time we can leverage satellite observations of crop production to create a more accurate price model that will help humanitarian aid organizations and other decision makers predict how much food will be available and what its cost will be as a result. This is a unique opportunity for an economic model to take climate variables into account in a way that can aid populations large and small," she said.

Agricultural economists often use a mathematical formula and typically data on crop yield, a range of market prices, and other variables to develop a price model that estimates what food prices may be in the marketplace. Brown applied remote-sensing data in an economic model producing an enhanced way for aid officials to combat a problem that affects 3.6 million people in Niger alone.

To use their price model in a real-world situation, Brown and her colleagues compared variations in crop production to variations in food prices in parts of West Africa. They focused on a sample crop, a drought-resistant grain called millet. Locally, people use millet to create a couscous-like dish. Brown's team observed the June-September wet season to the October-May dry season – and the amount and growth rate of green vegetation. Then, it studied how seasonal climate differences affected the crop’s price in local markets. 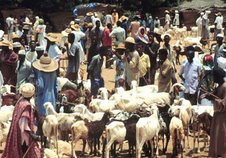 Image left: Farmers sell their millet crops at outdoor markets like this one in Senegal. Credit: Molly Brown/NASA

Brown used long-term data from sensors on NASA-built satellites to gauge the density of local plant life, an indicator of the strength of the crop. From space, sensors pick up reflections from the ground to determine the ground’s “greenness” and enable researchers to estimate the amount of rainfall. Those data in turn may be used to estimate the amount of grain that crops will produce. Brown combined the satellite data and climate variables with the price model to create maps of millet prices covering a complete area. With these maps decision makers can predict price changes, food availability and ultimately food insecurity.

Food prices are not determined solely by human action. Climate variables affect about 20 percent of the process of market pricing, according to the study's co-author Jorge Pinzon, a research scientist and mathematician at Goddard. This is a factor that decision makers often do not take into account when analyzing food security, Pinzon said.

"It is critical to include climate and environmental variables in food security planning when piecing together all of the forces that come together to create famine," said Pinzon. "This model can help officials better understand the role that climate plays in food availability and pricing, and also in famine warning when applied to a real-time planning effort."

Brown believes that information provided by this new technique can aid organizations that are part of the U.S. Agency for International Development's (USAID) Famine Early Warning System to stem suffering that occurs every year from food crises. Brown hopes that her method, funded by NASA and USAID, may eventually help the farmers in Niger more effectively plan what to grow and when to grow it to earn a living wage.

"This price model can be used in any region of the world where there are seasonal climate factors that can contribute to local food production crises," said Brown. "Even a country with normally adequate food production can still experience a food crisis if a drought hits. We hope that decision makers will work together with scientists to apply this model so that even a farmer on a small plot of land can better sustain his family during a drought."